Young adds another accomplishment to legendary career with win No. 1,000 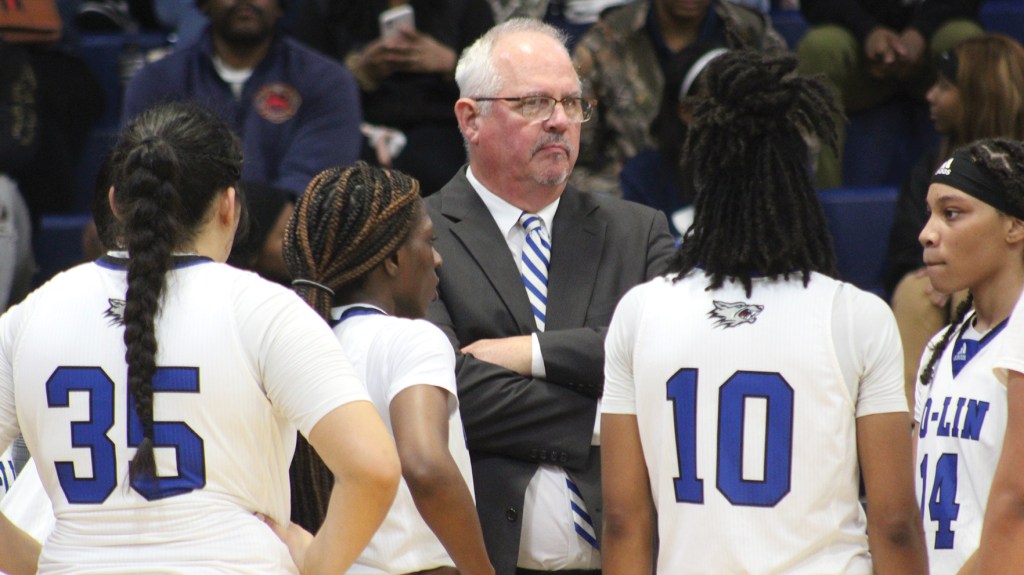 Gwyn Young adds another accomplishment to legendary career with win No. 1,000

Thursday in Wesson, the Copiah-Lincoln women’s basketball team gave everyone in attendance what they were looking for with a win over East Mississippi Community College.

It came on the court inside Mullen Gymnasium that bears his name as it was christened “Gwyn Young Court” in 2011.

Co-Lin is now 12-1 on the season while East Mississippi dropped to 3-7 with the loss, but the game was a close one as the visitors from Scooba led 17-14 after the first quarter on Thursday.

Sophomore guard Tandria Minor (Brandon HS) got the home crowd on their feet when she knocked down a long 3-pointer to give Co-Lin a 32-29 lead at the halftime horn.

Unfortunately, Minor injured her ankle on the shot and with that, Co-Lin would have to play in the second half without its second leading scorer.

Finding players to step up has been a trademark of this 2022-2023 edition of CLCC women’s basketball.

Sophomore starter Leilana Lewis (Baton Rouge) was on the bench in a walking boot with an injury. Sophomore forward Kierstan Ball decided to not return to school after the Christmas break and she’d been averaging 7.7 points and 6.7 rebounds per game in the first semester.

A 21- point, nine rebound game from freshman forward Ceara Myers (Baton Rouge) and 19 points by sophomore guard Zykeria Anderson (Raymond HS) proved to be enough for the Wolves to hold steady in the second half on the way to the eventual win.

Knowing that the milestone victory was a possibility, the home side of the bleachers was filled with former player and their families who’d come to support Young.

Many of those former players are now coaches themselves. Alums TeAirra Wilbert-Menzie (Hazlehurst High) and Travelyn Smith (Jefferson County) are both head coaches who brought their teams to Mullen Gymnasium to see the historic win.

When Young was hired by former Co-Lin president Billy B. Thames in 1975, his job responsibilities were clearly laid out.

Teaching math was his first responsibility as he did so as a high school teacher on the campus at what was then Co-Lin High School.

He was also to be an assistant for the junior college’s men’s basketball team and head coach William Lewis.

Thirdly, he was to coach the fledgling women’s basketball team.

The 1970s were the beginning of the emergence of women’s basketball in the United States. In 1971 the rules were changed to make it a full-court 5-on-5 game like the one played by men and boys.

In 1972, Title IX was signed into law, requiring schools to support women’s athletics with the same resources that were given to the men’s programs.

The AIAW administered the early postseason tournaments and during that time, The Mississippi University for Women and Delta State University were two of the best teams in the nation.

On Thursday, Young recalled win no. 1 that came nearly 50 years ago.

“I believe we beat East Central, and they’d been really good and were one of the teams that really got women’s basketball going within our association,” said Young. “I just remember that Coach Woods (ECCC Hall of Famer Lucille Woods) was really hot when we beat them.”

The numbers for Young can become overwhelming when you lay them out.

He’s sent players on to continue their careers and education at schools located all over the country.

He’s the winningest active coach in NJCAA basketball and that’s for both the men’s and women’s sides of the game.

When Young reaches win no. 1,008, he’ll be the winningest NJCAA women’s basketball coach of all-time, passing David Kragel who coached at Walters State in Morristown, Tennessee for 43 years.

Co-Lin and Walters State actually met in the 2010 NJCAA National Tournament. The Wolves took that meeting 64-56.

The story the raw numbers paint can never tell of all the lives changed and impacted by Young during his 47 years at Co-Lin.

When asked over the years about his success, Young always points the praise back to his players.

If he were to write a book about the things he’s seen and heard during nearly five decades of going to some of the smallest and largest gyms across Mississippi and Louisiana in the pursuit of recruits, you’d have a hard time believing some of his best tales.

Young once signed a player from the nation of Hungary that came to the United States with the ability to speak zero English. The ladies involved with tutoring services at Co-Lin during that time taught her English by ordering a Hungarian to English dictionary.

Many of his best players have come from local programs like Bouge Chitto, Brookhaven High, Franklin County, Loyd Star and others dotted around southwest Mississippi.

Before celebrating at a reception after the win over EMCC, he made sure to speak to local recruits that were in the gym.

He’s signed and coached the daughters of former players and inked plenty of recruits who suited up for one of his former players on the high school level.

He’s never done it alone though, as his wife Velesta has been right beside him as have been his daughter Jessica and son Lane. Lane Young has been an assistant for his dad at CLCC since 2017.

Velesta Young still invites each new team into the family home for Sunday night post-practice brownies and rotel dip as the group bonds and gels over the course of the season.

One of his greatest strengths is how Gwyn Young figures out what each team does well and emphasizes that during his practices and game planning.

Over the years he’s had teams that pressed in the full court and groups that shot more 3-pointers than his current team does. He’s had teams that played inside/out and threw the ball into the post on every trip and other groups have been more guard-focused.

His teams will always run plays in the offensive end of the halfcourt and they’ll often run out-of-bounds plays better than 90 percent of the teams they face.

Practice is highly structured and a mix of drills and running through plays against live defense.

Every game is followed with a film session during which Young highlights the plays and efforts that he liked and what he didn’t. Each new opponent brings a detailed scouting report that has likely plays that Co-Lin will see in the future with clips culled from Young’s study of film.

“He’s always going to have us prepared,” said Edwards, the leading scorer for CLCC this season. “Those film sessions can be really long after a loss.”

Young hates to lose, but he really hates it when his team doesn’t play hard enough to win. There have been times when teams that didn’t play with enough effort found themselves back on the court of Mullen Gymnasium, practicing after a loss.

He’s a humble servant-leader who doesn’t chase the spotlight or accolades despite being a member of the NCJAA Women’s Basketball Hall of Fame and a living legend within his chosen field.

How he isn’t already in the Mississippi Sports Hall of Fame is a mystery to me.

He’s a refreshing breath of some things truly staying the same in a world that feels like it’s often changing for the worse.

An example of not all changes being good would be how coaching attire has taken a nose-dive since COVID-19. Sweats have replaced suits all up down the college and professional ranks.

Young hasn’t embraced that style though as he still wears a suit and tie when his team hits the floor.

Thursday he was given another commemorative ball that marked the milestone win by Dr. Jane Hulon-Sims, the fourth different president he’s worked under at CLCC.

After taking pictures with his family and former players, Young stood on the court talking with a television reporter from Jackson just before being interviewed for a story that ran Thursday night on the news.

Before the camera went live, Young felt a tug on his jacket.

He turned to see someone holding a receipt and asking who was going to pay for the post-game pizzas for the team that had just been delivered.

“I guess I looked like the guy who’s supposed to pay for the pizza — I got on a suit and am holding a ball in my hands that says 1,000 on it,” said Young afterwards with a laugh.

Cliff Furr is the sports editor of The Daily Leader. He can be reached via email at sports@dailyleader.com.