Retired Colonel speaks on state of the U.S. military 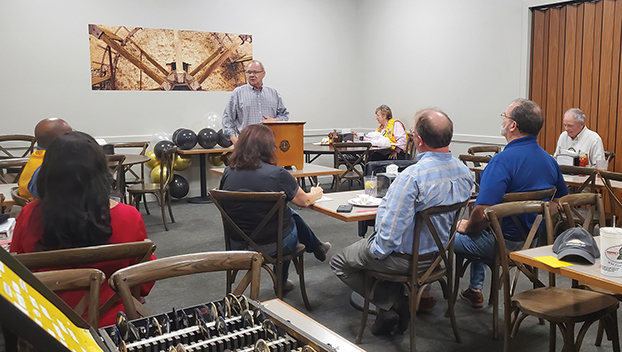 A Brookhaven businessman and retired military officer was the guest speaker Tuesday for the Brookhaven Noon Lions Club.

Col. Ken Powell, U.S. Army (Ret.), is the owner of R B Wall Oil and The Old Koke Plant in Brookhaven, and owns other businesses outside the area. A 1981 West Point graduate, Powell retired in 2011 after 30 years of military service.

His service included combat tours, leading in Operation Desert Storm with the 296th Transportation Division, working in the Third Personnel Command in Jackson, and designing down-range exercises at Ft. McPherson.

Powell was invited by Lions member and Marine Corps retiree Jim Hickman to discuss the current situation of the U.S. Armed Forces.

“The military’s sole purpose is to fight and win wars,” he said. “We tear stuff up and kill people. We hopefully do it by just means.”

Russia and China pose primary threats to the U.S. and the world, followed by the “pacing threat” of North Korea — secondary, but no less dangerous.

“The similarities between what Russia is doing and what Nazi Germany was doing in the 1930s are stunning,” Powell said. “We must continue to support Ukraine because Russia will not be satisfied with just taking Ukraine.”

Whether that support continues to be primarily financial will up to the nation’s leadership, he said. Congress is in a budget battle, and lots of people want to cut back on funding, including some who have historically supported the military. A balanced structure is what is ultimately needed, Powell said.

China’s main focus continues to be Taiwan, and has even within the past week made statements that the retired colonel said is setting the stage for a “provoked” invasion of the island nation.

“They want to say the U.S. provoked them, and for some time now, they have made almost daily probes at Taiwan,” Powell said. “How long can it go on without conflict? And with our supply chain issues, how much more are we going to allow China to control?”

North Korea is constantly threatening South Korea, where 38,000 U.S. soldiers are stationed, he said. No matter how large or effective it may be, the very authoritarian regime does have a nuclear program and is continually threatening to use it.

Powell identified three other challenges facing today’s military — recruitment and retention problems; the military-civilian divide; and “woke-ism.” Recruitment goals have been missed by almost one-fourth over the past few years, mainly because young people are not looking for jobs and only 18-27 percent of youth ages 18-25 are physically and mentally qualified to join the military.

About 30-40 years ago, almost every family had an active duty military connection. With the more pronounced divide today, and a general apathy in the American public, fewer people are eager to serve the nation in the Armed Forces, Powell said.

“Woke-ism” in the military is pursued to the detriment of preparedness, readiness and maintenance, he said.

“Social experimentation takes time, money and other resources away from where it is needed most,” Powell said.

Before Powell closed he spoke briefly on the recent (September 2022) opening of The Old Koke Plant, the years-long planning it took to get there, the 44 people employed, and plans to add business on the property.

Powell thanked the citizens of Lincoln County for supporting his business and employees, and reminded the Lions that one thing was most important if the nation is to be what it should — “Everyone at the top levels of our government needs to be prayed for every day.”