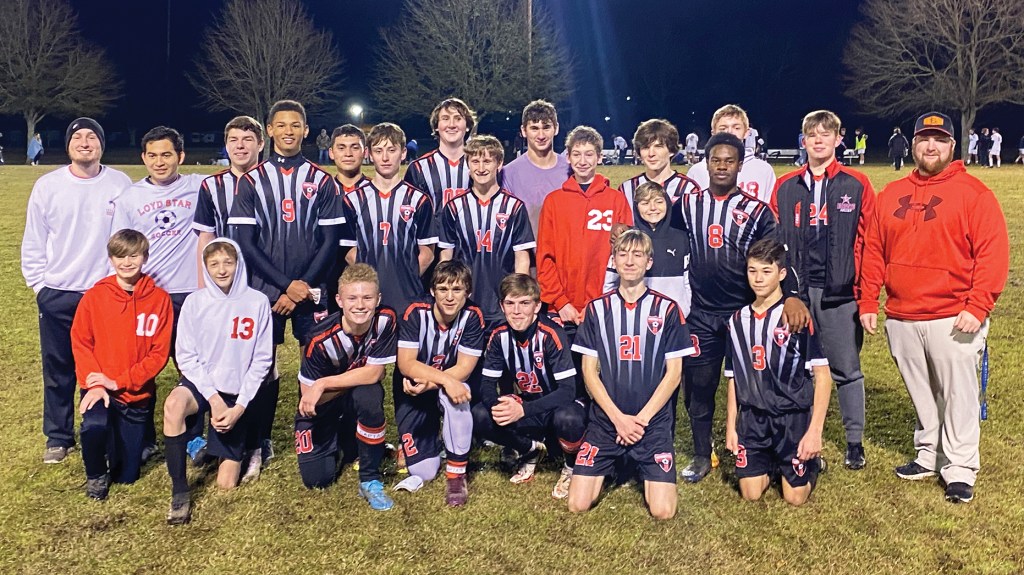 PHOTO BY CLIFF FURR Members of the Loyd Star boys’ soccer team pose after beating Southeast Lauderdale 2-0 on Monday at the Hansel King Sports Complex. The MHSAA Class I playoff win was the first in program history for the school. The team is coached by head coach Jordan Lea and assistant coach Charlie Lowery.

If you were at the Hansel King Sports Complex on Monday, you witnessed Loyd Star history.

For the first time ever, the Loyd Star boys’ soccer team won a postseason game with a 2-0 defeat of Southeast Lauderdale in the opening round of the MHSAA Class I soccer playoffs.

As the second-placed team in Region 7-Class I, the Hornets earned the right to host a playoff game and did so on a cold, muddy pitch Monday.

Midway through the first half, the Hornets got their first goal of the match when freshman forward Zach Reid connected with a cross right in front of the keeper that found the foot of fellow freshman Cooper Creel.

Creel used his right foot to redirect the ball past of a sprawling Southeast keeper and give his team a 1-0 advantage.

The ball Reid chased down appeared destined for the endline and an opposing defender tried to box Reid out and keep him from getting a final touch.

Just before the ball went over, Reid flicked it back in front of the goal to connect with Creel.

The duo would connect again minutes later to add an insurance goal.

With the SEL defense keying on Creel as he ran into the box, it left Reid open in front for another short goal that put the home team up 2-0.

“That first goal was a big one because it gives everyone a chance to exhale and know that we’ve got the advantage now,” said LS coach Jordan Lea. “We thought that attacking them from the wings would get us some good looks in front of the goal on crossing passes and that ended up being how it worked out.”

The win moved Loyd Star to 14-6 on the year and sets up a second-round match on Thursday at Crystal Springs (8-4).

On the season, Creel has scored 14 goals while junior Cooper Reid trails him with 13 goals scored. The lone senior on the team, midfielder Carter Holcomb, has scored 11 goals and sophomore Mason Smith has added 10 goals on the year.

Last year the team went 13-8 and finished second in the region but had to travel in the opening round of the playoffs, as this season is the first year for the MHSAA to give postseason berths to three teams from each region as opposed to two teams in the past.

The young Hornets of 2022-2023 have gelled as the season progressed, losing early in region play on penalty kicks to Wesson, before bouncing back from that loss to earn second place in the region behind Franklin County.

The Class I classification of MHSAA soccer is made up of teams that are either 1A, 2A or 3A in the other sports.

The Tigers from Lauderdale County controlled the ball with more consistency in the second half and had multiple runs into the box but were turned away by a back-line that communicated well for Loyd Star.

Freshman goalkeeper Dawson White made eight saves in getting the shutout for Loyd Star.

“We did a good job of talking through things on the backend of our defense and that’s something that we’ve had to get better at throughout the year,” said Lea. “Dawson is just a freshman and he’s a rookie goal keeper for us, but he didn’t play like a rookie tonight.”