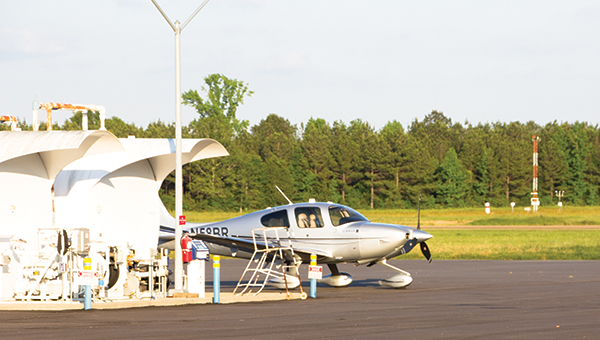 Photo by Alex Jacks / Engineer Ryan Holmes reported at the last Board of Aldermen meeting that the next airport project will include crack sealing and restriping the runway.

A federally funded improvement project at Brookhaven-Lincoln County Airport was recently completed, and more work on the facility is set to begin soon.

“The current airport project is complete,” Engineer Ryan Holmes told the Board of Aldermen recently. “The contractors grassed it a couple of weeks ago. We will begin the close out process on that soon so we can get everything straight with the Federal Aviation Administration.”

The airport received a Federal Aviation Administration grant, totaling $362,873, last year to complete a number of projects including updating the apron and taxiway.

The apron is the area of the airport where aircraft are parked, unloaded or loaded, refueled or boarded. The project also allowed for the acquisition of 107 acres of easements to remove obstructions.

This grant was part of a $10 million federal effort to improve airport facilities around Mississippi.

“Airports in Mississippi utilize this federal grant program to improve the efficiency and safety of their aviation facilities,” Chairman of the Senate Appropriations Committee Sen. Thad Cochran, R-Mississippi, said last year. “I appreciate the fact that communities also use these improvements to increase the value of their airport facilities as economic development tools.”

Funding for the grants is drawn from the Airport and Airway Trust fund, which is supported by user fees, fuel taxes and other similar revenue sources.  The Federal Aviation Administration oversees the grant distribution.

Holmes also informed the board of the next airport project.

“It’s going to consist of crack sealing the runway — which if you haven’t been out there it’s been a really big issue,” Holmes said. “The cracks are getting pretty large. The grass is growing through them. We need to seal those up so water can’t get into our sub-base there. It will also consist of striping the runway. The striping there is almost completely gone. If for some reason the runway lights don’t come on at night and they’re trying to land with just the planes lights, it’s pretty hard to see.”

The other part of the project will consist of updating the airport’s master plan, Holmes said.

“It has been about 12 years since we’ve updated the airport master plan, which is something the FAA encourages regularly,” Holmes said. “It helps us get federal money, which is generally what y’all use to do work out there. It is basically just a report that we submit to them that looks at the airport growth. That’s what the project will consist of. We’ve submitted a preliminary project application to the FAA and they’ve approved it. Then next step is to draw up the plans, advertise for bids, get bids and then submit an application sometime in July to them again.”

Holmes did not say how much the project will cost, but did inform the board that the city is responsible for 5 percent of it.

Holmes concluded his airport renovation update by presenting a plan for a new airport welcome sign.

The local Boy Scouts troop would like to build a sign to replace the old one near the airport runway as part of its Eagle Scouts project, he said.

“There is currently a metal sign that says, ‘Welcome to Brookhaven.’ I have sent a request for this to the FAA just because it is so close to the runway. I am bringing this to the board because I think we should have approval or at least have the opportunity to look at it,” he said.

Mayor Joe Cox requested that Holmes provide more information regarding the materials that would be used to build the sign before the board approved it.

“I think we might want to see a little bit more of their design before we actually approve what they would be putting out there,” Cox said.

The Brookhaven School District Board of Trustees on Tuesday accepted a proposal for the district’s audit services for fiscal years... read more