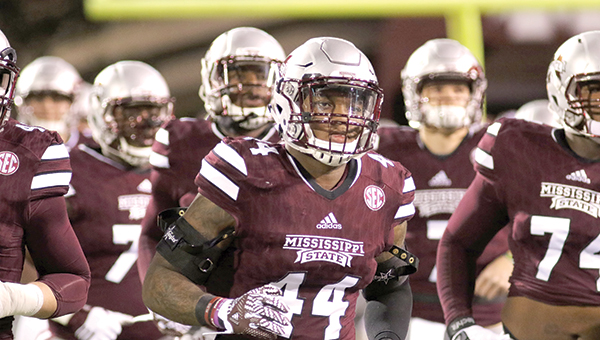 But it was a key fourth-down stop early in the third quarter that gave the Bulldogs the second-half momentum they needed. The Rebels attempted a run on fourth-and-1 from the Bulldogs’ 18, but Lewis came up big. Lewis had 1.5 tackles for loss in the game.

Lewis and the rest of the Bulldog defense were dominant. Ole Miss didn’t score a point in the second half.

The linebacker’s biggest game statistically this season was at BYU, where he racked up 12 tackles — seven solo. But Saturday’s showing will be one fans are not likely to forget soon. The Bulldogs had lost the previous two Egg Bowl matchups, and the win in Oxford was an exclamation point on an otherwise disappointing season.

The Rebels’ loss means they miss the six-win mark typically needed to get to a bowl game.

Lewis wrapped up the season with 72 tackles, and was leading all SEC freshmen in the category heading into Saturday’s game. He finished second on the team behind Richie Brown.

“Leo is trying to learn how to not just play hard but learn how to be a football player and put himself in a position to make reads and make plays,” coach Dan Mullen said. “One of the things, you look at his attitude. He loves the game. He loves to play. He works hard at the game. In the long term, it is going to make him a really good linebacker. In the short term, you get to see flashes of him doing great things. As he learns the defensive system more and more, as he learns what offenses are trying to do more and more, he will make even more plays. It’s a lot easier to make a play when you know what the other team is already going to do, you know what you are going to do and you know how I am going to use what I use to win. The more experience he has, the more you will see him make plays.”

Heading into the Egg Bowl Lewis found himself at the center of the NCAA’s ongoing investigation of Ole Miss. The talk of the ongoing probe into rules violations within the Rebels’ football program resurfaced when administrative assistant Barney Farrar was put on leave as the NCAA waits to interview Farrar in the latest twist in the four-year investigation, the Oxford Eagle reported.

Farrar was scheduled to meet with the NCAA, but the interview has been delayed as the NCAA tries to corroborate claims made by Lewis of violations allegedly committed by Ole Miss during his recruitment, according to a report by the Ole Miss Spirit.

Wesson’s Farrod Green may not have racked up record-setting stats for MSU, but the tight end did a good job of blocking this season. He set up several big runs for quarterback Nick Fitzgerald.

“He has done a great job in his performance,” Mullen said. “I think he has really stepped up his game and made plays for us in the running and passing game.”

Green was the first player from Wesson to be offered a D1 scholarship in 35 years. He finished the regular season with 108 yards on 10 catches with one TD.

Copiah-Lincoln Community College transfer Donald Gray had two catches for 12 yards and one touchdown for MSU in Saturday’s win.