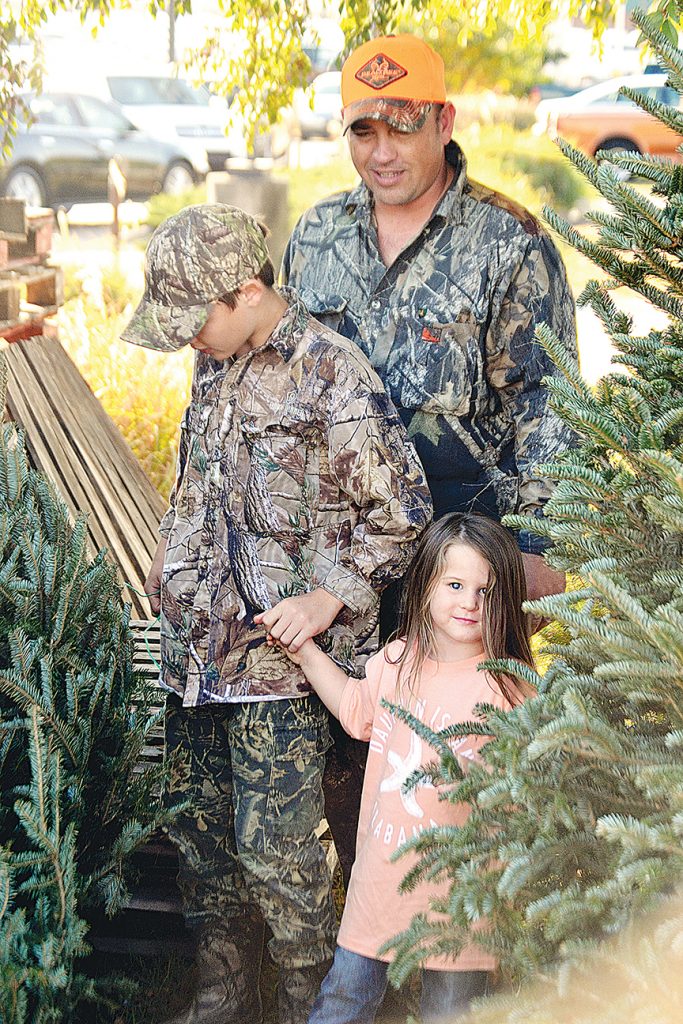 Photo by Donna Campbell/After a morning deer hunting, Deacon Wallace, left, shops for a Christmas tree with his dad, Justin Wallace, and sister, Cambri Saturday at Brookway Market Basket. The family, from Bogue Chitto, wanted a live Frazier fir this year and Cabri, who is almost 4, picked one more than double her height.

Stuffed with blessings and turkey, many shoppers took to the streets of Brookhaven as early as Thursday night to look for Christmas steals, though Black Friday was probably the best day for bargains and big trees.

Laurel Pope and her mother, Michelle Pope, were visiting family in Bogue Chitto for Thanksgiving, but decided they should visit a few stores as well. “We were out last night,” she said Friday outside Hobie’s Sports & Outdoors in Highland Square. The family, from Carthage, hit several stores in downtown Brookhaven before heading to Belk and JC Penney in McComb.

Sonya Moore, of Brookhaven, flipped through a $15 rack in front of Hobie’s with her son, Chandler. Wearing a “Tis the Season” T-shirt, she already had a few bags of purchases on her arm. Her husband, Steve, had looked at boxes of boots stacked outside and was back in the store to find a pair for Chandler’s Christmas present.

The Moores had been out of town for Thanksgiving and slept in Friday morning. They made it out by lunch to find a Christmas tree and do some shopping. After Brookhaven, they planned to go to McComb, where her husband has an office.

“We’re sticking to Brookhaven, then hitting the mall,” she said.

Not everyone was shopping for goodies to wrap and put under the tree. Some just needed the tree.

Justin Wallace and his son, Deacon, 12, and daughter, Cambri, 3, wanted a live tree for their Bogue Chitto home. They’d been deer hunting all morning at Moak’s Creek and were still wearing their camo when they stopped at Brookway Market Basket for a Frazier fir.

The National Retail Federation, the nation’s largest retail trade group, expects holiday sales to rise 3.6 percent to $655.8 billion for November and December, better than the 3 percent growth seen for those months last year. That excludes car sales, gas and restaurant receipts, but includes online spending and other non-store sales such as catalog spending. Online sales are expected to be up 7 percent to 10 percent to as much as $117 billion, compared to a 9 percent growth rate last year. That means that online sales could account for 18 percent of overall holiday sales.

The NRD estimated that 59 percent of Americans — about 137.4 million people — planned to shop during Thanksgiving weekend. The numbers, which cover Thanksgiving Day, Black Friday and Small Business Saturday plus today, include both in-store and online shopping and are up from 58.7 percent or 135.8 million people last year.

“Black Friday remains one of the busiest shopping days of the year, with Americans planning to take advantage of aggressive in-store and digital promotions over the entire holiday weekend,” NRF President and CEO Matthew Shay said. “Retailers know consumers are spreading out their holiday budgets to shop throughout the season. While there’s no doubt of the incredible promotions offered during the weekend, the holiday shopping season is long and consumers will look for and expect great deals down to the very last minute.”

The annual survey released recently by the NRF and Prosper Insights & Analytics found that 21 percent of weekend shoppers plan to shop on Thanksgiving Day, nearly the same as last year’s 22 percent. But Black Friday will remain the busiest day of the holiday weekend with 74 percent planning to shop that day, the same as in 2015. A substantial 47 percent are expected to shop on Saturday; of those shoppers, 24 percent say they will be doing so specifically to support Small Business Saturday, up from 22 percent last year. Today, 24 percent expect to shop.

“Millennials continue to drive the trend of hitting the stores – both on their feet and online – as soon as the turkey is finished,” Prosper Principal Analyst Pam Goodfellow said. “Whether they’re hoping to find gifts for themselves or for the folks on their lists, they will do their research to find the best deals of the weekend and have allotted a large part of their holiday budget for Black Friday, Small Business Saturday and Cyber Monday spending.”

“For many millennials, every Thanksgiving weekend they can remember has involved hopping online to find the best deals,” Goodfellow said. “For this group, it’s more than just a weekend of good deals, it’s a holiday tradition.”

While not included in the 137.4 million total for the Thanksgiving weekend, 36 percent of consumers say they plan to shop online on Cyber Monday, up from the 34 percent in 2015.