EMT responds to call from God

You never know what’s going to happen when you get a call as an emergency medical technician.

He’s been responding to calls for over 20 years, but the best call he ever answered was God’s.

Martin started as a volunteer fireman. He decided he could help the community more by going to emergency medical technician school.

The 51-year-old said he loves his job and wouldn’t trade it for anything.

“I am where the Lord wants me to be,” Martin said. “I let the Lord lead me into this path.”

Martin’s daily experiences can run the gamut from a simple illness to the death of a patient.

“It takes a little getting used to,” Martin said. “The dispatcher tries to give us as much information as possible before we arrive.”

The radio conversations aren’t very long because someone else may call in with another emergency.

The EMS technician enjoys working with his co-workers who have became friends and spending time with his family — wife Julie Martin and daughter Bridget Martin ­— during his off time.

“I’m a firm believer that not everybody should see what I have seen,” Martin said. “We try to compartmentalize it, and I have good people I work with who help me with that.” 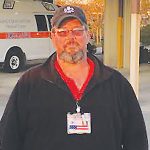 Rainee’s reign comes to an end

As the reign of Lincoln County’s goodwill ambassador comes to an end, the Brookhaven- Lincoln County Chamber of Commerce is... read more