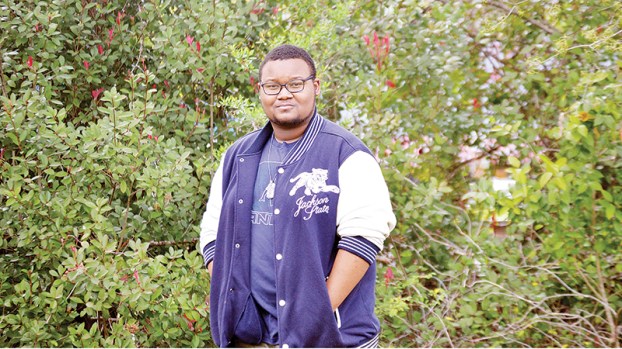 Rajavion Mackabee of Brookhaven is quickly completing his checklist for success.

Invitation to two honor societies while still in his freshman year. Check. Check.

“My mom and dad always told me to do your best,” Mackabee said. “And even if you are doing your best, your best could be better.”

The 18-year-old has been accepted into Alpha Lambda Delta Honor Society and the National Society for Collegiate Scholars.

He’s attending Jackson State on a full room, board and tuition scholarship because of his stellar performance on his ACT while a senior at Brookhaven High School.

Mackabee took the test four time, earning a 25, which when combined with his 3.8 GPA at graduation, earned him the scholarship.

He’s working hard to guarantee his own success. “I make sure I attend class every day, notify teachers if I can’t, get assignments done early just so I can be creative to clear my mind and relax,” Mackabee said.

The graphic design major said he wants to start internships next summer to prepare for life after college. He said his accomplishments so far are only the start to what he has planned throughout the next three years.

Mackabee’s mom Velma Lewis, dad Ken Lewis, brother Kenneth Breland and grandmother Clara Mackabee are there to motivate him as he sets his eye on the prize — graduation in 2020.

“My grandmother told me to always keep God in my life and whenever I feel like things are bad to just pray and know that things could get better,” Mackabee said.

“Membership gives students access to a number of amazing benefits including career and networking resources, scholarships, travel and service projects both on campus and in the community,” said Stephen E. Loflin, NSCS founder and CEO.

NSCS is a member of the Association of College Honor Societies and is the nation’s only interdisciplinary honors organization for first-year and second-year college students.

Membership is by invitation only, based on grade point average and class standing.

Waste Pro representatives were on the chopping block again at the Lincoln County Government Complex, but this time it was... read more