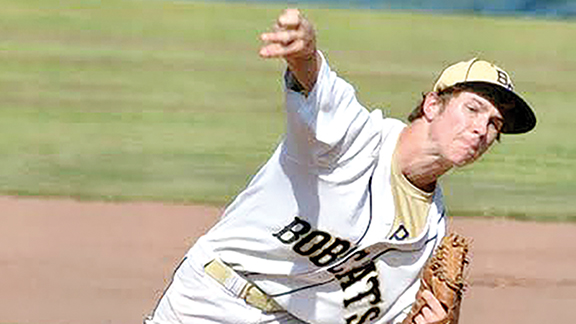 Trey Nettles of Bogue Chitto fires a pitch in their sweep of McAdams in the first round of the 1A state playoffs Friday afternoon. (Photo by Stacy Leake)

Bogue Chitto cruises through first round against McAdams

The Bogue Chitto Bobcats hosted McAdams in the first round of the 1A state playoffs and won both games easily to advance to the second round.

At 4 p.m. Friday afternoon, both teams took to the diamond to make their run for the state championship title. The Bobcats exploded at the plate and took game one by a score of 17-0.

The Bobcats scored five runs in the first inning to start the game. In the second inning, the Bobcats added on 12 more runs to end the ballgame with a 17-0 victory and take control of the opening round of the playoffs.

Tucker Lambert led Bogue Chitto in game one with a home run and Brice Bullock added on a big double to score three runs for Bogue Chitto.

The second game of the playoff doubleheader was more of the same as Bogue Chitto jumped out to an early lead and never looked back.

Tanner Gunther got the start on the mound for Bogue Chitto and came out a little rusty to start the game, but finished strong for the Bobcats. Gunther gave up four walks in the first inning, giving McAdams the early 1-0 lead. After the rough start, Gunther settled down and got the Bobcats out of the inning.

Bogue Chitto came out swinging with the bats in the bottom of the first inning, as they scored 10 runs to take a commanding 10-1 lead after the first.

The Bobcats tacked on six more runs in the second and third inning to end the game and advance to take on the winner out of Lumberton and French Camp this week.

Lambert came up huge once again for Bogue Chitto with a grand slam. Gunther also came up big at the plate with two triples and a double in game two. Bryce Nolan had two singles in game two. Mikah Smith, Grant Leake and Trey Crittenden each had a single.

Enterprise hosted Union Friday night in the opening round of the 2A state playoffs, which ended in dramatic fashion. Tied... read more