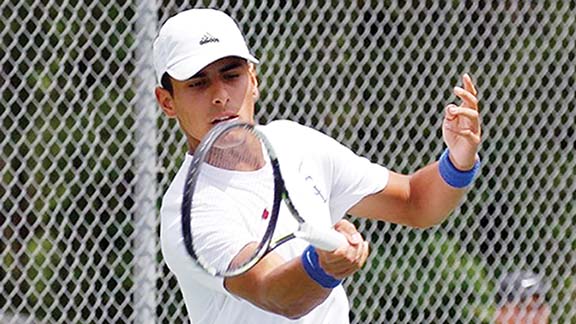 Sebastian Osorio of Co-Lin goes for the forehand Tuesday in his singles match of the NJCAA national Tennis tournament in Plano, Texas. (Photo submitted)

Co-Lin’s Sebastian Osorio played in the No. 1 singles draw and entered the tournament unseeded. Osorio rolled by Barton Community College’s Marcel Miasoto in the opening round 6-4, 6-1. Osorio faced Seward College’s Carlos Anez, the No. 3 seed, in the second round. The pair went back and forth in the opening set, but Osorio hung on in a tiebreaker. Anez stormed back and took the second 6-0, however Osorio stayed alive by taking the third set 6-4.

In the quarterfinals Osorio took on Juan Cruz Scoppetta of Laredo Community College, the No. 5 seed. Scoppetta defeated Osorio 6-1, 6-1.

Juan Pablo Pinilla played in the No. 2 singles draw as an unseeded player and advanced to the second round. Pinilla defeated Oakton Community College’s Peter kloda 6-2, 6-1, but lost to the No. 6 seed Lucas Freitas of Cowley College 6-2, 6-2.

In doubles action, Pinilla and Osorio paired up in the No. 1 draw and grabbed an opening round win over Daniel Diaz and Ian Millan of Prairie State Community College. The win did not come easy as the Wolves hung on for a 6-3, 3-6, 6-3 victory. In the second round the duo defeated Marc Avalos and Francisco Ton of Pima Community College 6-3, 6-3 to advance to the quarterfinals. In the quarterfinals, Co-Lin lost to the No. 1 seed Tyler Junior College consisting of Ferran Calvo and Enrique Pardo. The Wolves fell 6-1, 6-3.