A brush with life: Rosemary Leggett, BRAG’s artist of the month, captures God’s creations in her paintings

Walk into the Brookhaven-Lincoln County Public Library and you’ll be greeted by a large oil painting featuring a single flamingo.

Walk past it and you’ll see a multi-masted ship painted on an ocean of blue in a frame reminiscent of reclaimed driftwood whitewashed and repurposed. A blue heron in darker tones with a complementary frame joins the others to make a trio that serve to introduce the art of Rosemary Leggett.

Leggett is the Brookhaven Regional Art Guild’s featured artist for August. Over 130 original paintings are on display in the library, mostly within the gallery room. Works in oil, charcoal and pastel adorn the walls and easels, displaying subjects as varied as seascapes, animals and Native Americans.

Leggett began drawing like most people do, as a young child playing with pencils and crayons. But when she was in high school, her interest was piqued as she watched a classmate draw.

“She did beautiful shading,” said Leggett, “and that sparked my interest in art.”

Leggett went to college at Southern Adventist University, graduating with a degree in physical education and health for grades K-12, and a minor in art.

Though she has worked primarily in oil paints and drawing, within the past two years the local artist has begun to focus on working with pastels. One of her pastel paintings on display in the library is of a majestic lion, drawn from a photograph Leggett took on one of her frequent trips to zoos.

“The lion was one of the first pastels I ever did,” she said. “I love the backlighting, and thought, ‘This will be so much fun to do’. I’ve been hooked on pastels since.”

Leggett takes her own photos of most of her subjects and works primarily from those, except when it comes to still life paintings. Those are 99 percent from real objects instead of pictures.

Her favorite subject to paint is animals.

“They’re probably my number one things I enjoy doing,” she said. “And second I love doing people — portraits and figures. And the rest. I like to do some of it all.”

Though Leggett said she took some time off from painting while raising her children, along with husband Dr. Hugh Leggett, she has focused on her work for the last 10 years or so.

Art is her passion.

“There are so many things to paint, and so much beauty outside,” she said. “God’s creation is magnificent. I can never copy it, but I like to try.”

Leggett’s exhibit will be up through August. A reception will be Thursday, Aug. 17, from 4:30 to 6:30 p.m. Leggett will be in the gallery at that time.

To young artists, her advice is simple.

“If you have an interest in art, go for it. Get instruction and find a mentor and you will really go places if it’s really a goal for you,” Leggett said. “You can do it for the rest of your life.”

And Leggett plans to do just that. 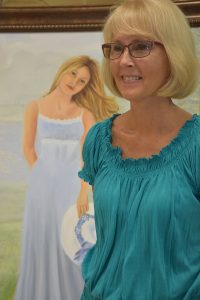 Tony and Tonya Boswell announce the engagement and upcoming marriage of their daughter, Charlee Boswell, of Brookhaven, to Jeremy Laird,... read more