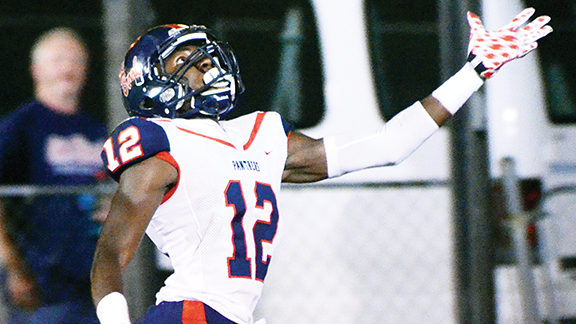 Junior wide receiver John Hilbert of Brookhaven reaches for a pass in the end zone in the Panthers’ 52-20 win over South Pike last week. (Photo by Dylan Rubino)

With five of the local football teams owning a 2-1 overall record, week four is a statement week for those schools looking to make some noise in their respected divisions.

Brookhaven, Brookhaven Academy, Loyd Star and West Lincoln all started the 2017 season 0-1, but have rallied to win two straight weeks heading into tonight. Each team could leave their mark tonight and prove they are teams to be reckoned with on the gridiron.

The big game this week pits the Wesson Cobras on the road to face Lincoln County opponent Loyd Star. The contest should be an interesting matchup between two strong rushing attacks.

Enterprise and Bogue Chitto look to bounce back after losing by multiple touchdowns last week. Lawrence County looks to build momentum after picking up their first win of the season last week against Raleigh when they hit the road to face Bay High in Bay St. Louis.

It should be another eventful night under the lights. Here’s what to look out for.

How will BHS play in a rivalry game?

Brookhaven and McComb have been rivals for many years and now the Panthers will get the chance to host the Tigers tonight at King Field.

McComb comes into the matchup 0-3 on the season including losses to Hazlehurst and Tylertown in their last two games.

The Brookhaven offense comes into the rivalry game firing on all cylinders, scoring 93 points in their last two games, led by running backs Damarrell Leggett and JQ Edwards.

The solid play from quarterback Sevante Quinn has boosted the Panther offense and has given the unit a big boost.

The defense has stepped up its game as well, led by Jeffery Johnson, Jemaurian Jones and Wesley Calcote.

Brookhaven played exceptionally well in their last rivalry game against Lawrence County and they should do the same at home against McComb.

Which rushing attack will prevail?

The matchup features strength on strength and there should be a lot of yards put up in the contest.

Led by the tandem of Berry and Patrick Price, head coach Brian Ford at Loyd Star has a good situation on his hands with the two backs.

Which defense will step up and make the big stop when it matters tonight at Loyd Star? Both Wesson and Loyd Star have the defenses capable of making the one stop that will win the ballgame.

Pelahatchie comes into the matchup 3-0 on the season and has proved to be one of the best teams in 2A.

The Chiefs come into the matchup not only undefeated, but an offense that has put up 124 points in three games.

Pelahatchie is led by junior quarterback Javeious Purvis, who is the true definition of a dual threat quarterback. Purvis has passed for 542 yards on the season with four touchdowns and no interceptions. The junior also leads the team in rushing with 637 yards and eight touchdowns in only three games.

Purvis provides a matchup problem for West Lincoln, but the Bears have the two-way players to pull out the victory.

Chase Owen, Le’Darrius Jones, Julian Anderson and Michael Brothern have been standouts over the past two weeks for the Bears.

If head coach BJ Smithhart can get strong performances from those players, West Lincoln has a good shot at escaping with the victory.

The Cougars got their first win of the season last week over Raleigh 32-22.

Quarterback Jerome Dudley returned after sitting out against Brookhaven and tossed for three touchdowns against Raleigh.

Jadarrius Grandberry rushed for 124 yards and one touchdown to lead the Cougars on offense.

The Lawrence County defense struggled last week, giving up 320 rushing yards to Raleigh, but still pulled out the victory.

The Bay Tigers come into this matchup with a 0-3 overall record, being outscored 32-96 in those games.

If Lawrence County can go on the road and come out with the victory, the season may turn around for the Cougars.

Can Enterprise and Bogue Chitto bounce back?

Enterprise and Bogue Chitto are coming off blowout losses and struggled defensively to keep pace.

The Yellow Jackets are fighting off a slew of injuries on both sides of the football.

A bright spot for the team has been the play of sophomore Tailor Young, who continues to shine on offense and defense.

Bogue Chitto is coming off a 55-14 loss to Wesson. The team fell in a hole early as the team trailed 35-0 after the first quarter.

The Bobcats look to rebound tonight at Mt. Olive.

Fighting back from a rain-shortened season, the Brookhaven Lady Panthers played a doubleheader Tuesday night at home against Wingfield. The... read more