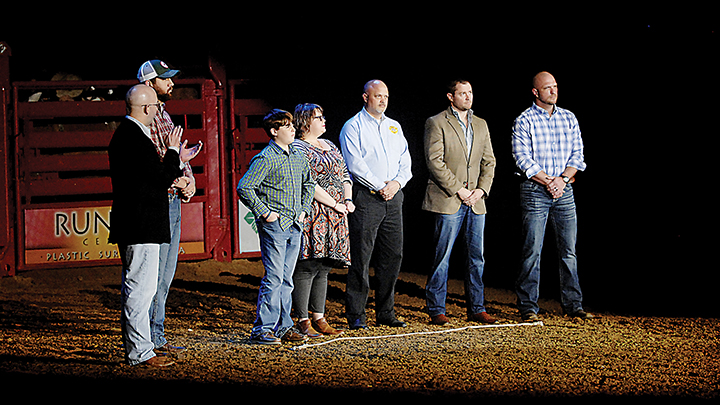 Thousands of rodeo fans stood and clapped during an emotional tribute to fallen Lincoln County Deputy William Durr and other first responders. The commemoration was held at Saturday’s opening of the Dixie National Rodeo at the Mississippi Coliseum.

The rodeo announcer, sitting on his horse, opened the ceremony by recounting the heroic details surrounding Durr’s death. It was a moving description of the night the deputy lost his life.

Durr was killed in the line of duty alongside seven civilians in May of last year. His death and the subsequent action taken by local law enforcement serve as lasting examples of the incredible risks first responders take in the name of public safety.

Durr’s widow, Tressie Hall Durr, and son, Nash Durr, were escorted into the rodeo arena with several law enforcement officers. The Coliseum was dark except for a spotlight positioned on the honorees, and rolling applause poured from the crowded stands.

“It was pretty intense and emotional. I don’t want William’s death to have been in vain, and it’s so wonderful that people have continued to honor him,” Tressie Durr said.

She described the event as “bittersweet and touching” and recognized it as a particularly important moment for her 11-year-old stepson.

“William and I always took him to the rodeo,” she said.

She was glad Nash got to experience firsthand the deep appreciation Lincoln County has for his father, and she said he enjoyed being behind the scenes at the rodeo. When it ended, he told her very succinctly, “That was fun.”

Mississippi Agricultural Commissioner Cindy Hyde-Smith helped organize the ceremony and made a special appearance during the rodeo.

“It was a pleasure to recognize and honor our first responders and the Durr family as ‘heroes’ during the Dixie National Rodeo. They show a tremendous amount of courage each day as they willingly put their lives at risk to serve and protect our communities. They don’t always get the credit they deserve, and recognition at the rodeo was just one way to express our gratitude for their dedication to making our communities a safer place to live,” she said.

Lincoln County Sheriff Steve Rushing and other law enforcement officers were also recognized for their valor.

“It was a great honor. It’s a reminder that first responders risk their lives every day. This week, across the country, I think we’ve already lost around six or seven officers,” he said.

The Dixie National Livestock Show and Rodeo draws crowds from all over the United States, and Rushing said he was glad so many people got to hear Durr’s story.

After the rodeo, Tressie Durr said her stepson looked up at her and said, “Can you believe they did that for Daddy?”

She smiled and told him, “There are a lot of people who love your daddy.”