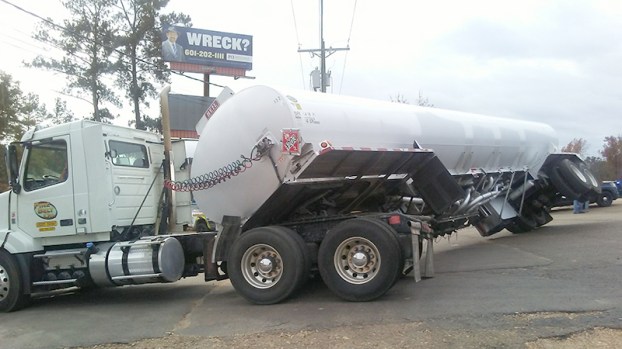 Photo Submitted/A tanker filled with 8,800 gallons of fuel leans to the right after a traffic mishap earlier today at R.B. Wall Company Inc. on Hwy. 51.

A northbound lane of Hwy. 51 is closed as authorities work to right a leaning fuel tanker

The state’s hazard experts are on scene at R.B. Wall Company Inc. to oversee the transfer of nearly 9,000 gallons of fuel from a tanker that nearly flipped over when a driver made a sharp turn into the parking lot earlier today.

The contract driver from Pine Belt Oil Co. of Purvis appeared to turn his rig too sharply into the parking lot at the gas station on Hwy. 51. Four of his back tires left the pavement and the tank leaned precariously to the right.

“He’s one of their best drivers in my opinion, but he sure whipped around there the wrong way,” said station owner Ken Powell. “Something happened. He’s got it laid over. It could be a lot worse.”

One of Powell’s employees took a photograph of the truck perched on its wheels like the Leaning Tower of Piza. The truck is sitting under a billboard advertising the services of a personal injury attorney and says “Wreck?” in big, bold letters.

“This picture is pretty funny although it’s not a funny situation,” Powell said. “It could have been a lot worse. It could still get a lot worse if something happens to go south.”

The tank holds 8,800 gallons of gasoline and Mississippi Department of Environmental Quality and Lincoln County Emergency Management Director Clifford Galey are on hand as the fuel is offloaded. The Brookhaven police and fire departments are assisting as well.

One of the northbound lanes of Hwy. 51 is closed to traffic until the truck is righted.

Davis Wrecker is using cables to keep the truck from falling over, Powell said.

“We’re thinking in the next couple of hours we’ll have it rectified and everybody will be happy and it will be a war story we’ll be talking about,” he said.