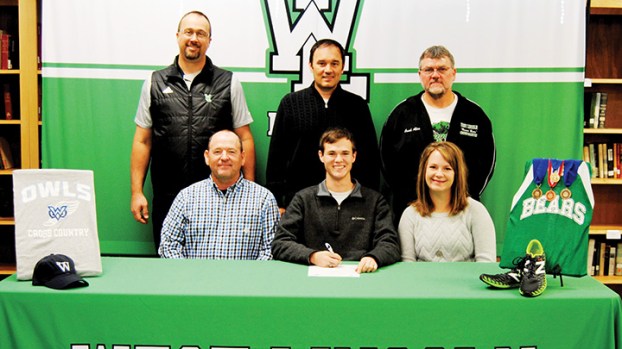 Cross-country has taken Jonathan Mathis over countless miles of woods, trails, and roads throughout Southwest Mississippi since he began competing as a runner in seventh grade.

Now, the sport will take the West Lincoln senior to college, as Mathis recently signed to run collegiately for The Mississippi University for Women in Columbus.

“MUW started talking to me when I was a junior and they came and watched me run a couple times this season,” said Mathis. “I actually got to watch them run as well when we were both competing in the Watson Ford meet at Choctaw Trails.”

There are a few more than 200 miles between The W in Columbus and Flea Hop in western Lincoln county, but Mathis was impressed with what he saw upon visiting the school.

“It’s a very nice campus and their athletic facilities are top of the line,” said Mathis. “They’ve spent a lot of effort improving their athletic programs and I like that the school is smaller. I wanted to go somewhere that the instructors would know me instead of me just being another name on the roll.”

The W is located in the Columbus city limits and the well-maintained and manicured campus gives the university a charm that many in this area might not know about. The school has an enrollment of around 2,500 and was founded in 1884. Men were admitted to the school beginning in 1982 and make up close to 20 percent of the current student population. The MUW athletic teams are members of the United States Collegiate Athletic Association (USCAA).

“I had visited some other schools, but when I went to Columbus it kind of blew me away how nice the school is,” said Mathis. “They have a strong nursing school there and that’s what I plan on majoring in so it just all felt right, it felt like home.”

Mathis has been part of the buildup of West Lincoln cross-country. Three years ago, Jason Watts of West Lincoln signed a scholarship with Blue Mountain College to become the first program alum to run in college.
“There weren’t any seniors between my class and Jason,” said Mathis. “There’s a culture of camaraderie in our cross-country program and I’m proud to be part of it. We run together in the summer and we push each other to improve.”

West Lincoln cross-country coach Greg Allen says Mathis has been a leader on and off the trails for his program.

“He’s a dedicated young man that comes from a wonderful Christian family,” said Allen. “He’s been our leader and captain for several years. He runs with his heart and leads by example, and he’ll be a great addition to the program at The W.”

The MUW Owls cross-country teams are coached by Morgan Turnipseed. At MUW, Mathis will run with a former teammate in current freshman Matthew Geis. Geis was part of the West Lincoln program in junior high before his family moved to Vancleave, where he graduated before enrolling at MUW.

Mathis says he won’t be the last Running Bear to sign collegiately. Mathis finished in fourth place at the MHSAA 2A state meet earlier this year. His teammate, sophomore Tiler Castillo, finished in second place.

“Tiler will run in college if he wants,” said Mathis. “He’s a guy that really pushed me this year in practice and in competitions to run my best. There are a lot of young runners at the school that are going to have great careers in the program. I’m just glad I got to be a part of it.”

The unbeaten West Lincoln Lady Bears capped their season with a 49-18 win over Enterprise Thursday night in the Lincoln... read more