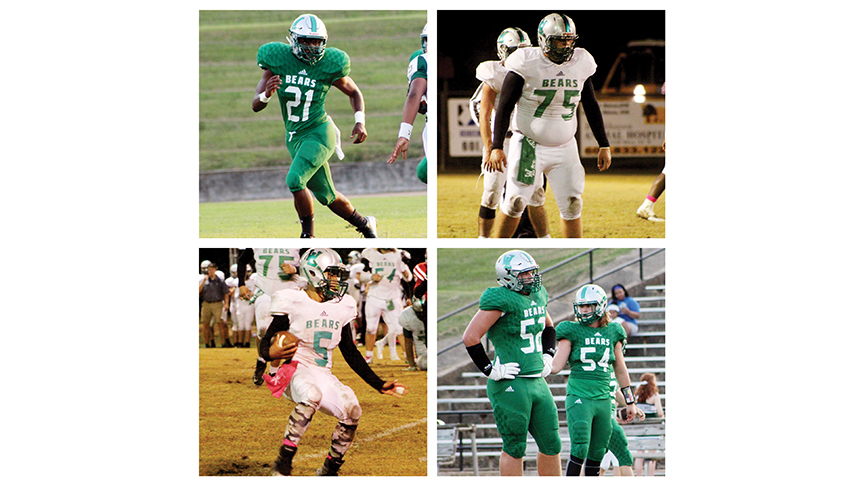 Daily Leader file photos Despite losing coach B.J. Smithhart to Franklin County after two seasons, the West Lincoln football program has never been in better shape since its inception over 20 years ago.

The best roommate I ever had in college was a West Lincoln Bear. His family roots run deep at Flea Hop and he was part of history when he played on the first football team ever fielded at West Lincoln. He was also part of the first victory. I’ll let him describe what that night was like.

“We won the first game that was ever played on our home field,” said Will Pepper (2000 alumnus). “It was the fall of 1999. We played our first season the year before and were playing a mix of varsity and junior varsity teams those first couple seasons.”

A group of dedicated parents and boosters put in countless hours to get the field now known as Perry Miller Field ready for its first game.

“There was more red clay on the field than grass…by a lot,” said Pepper. “We got up 19-0 on Clarkdale and then they started coming back. I had rolled my ankle and had it in a bucket of ice, but when Clarkdale made it a three-point game, the coaches taped it up and I went back in.”

The first win in WL football history wasn’t secured until the final play when Kalis Fells knocked a Clarkdale ball carrier out of bounds to secure the 19-16 victory.

“We were celebrating on the field and one of my teammates jumped on my back and I rolled my ankle again,” said Pepper. “I was laying on the ground in tears, partly out of pain and partly out of happiness. When I looked up there was a photographer from The Daily Leader (Thomas Wells) standing over me and taking 600 pictures. I think they ran a big picture of me laying there in the paper.”

Coaches have come and gone over the years

I’ve followed the rise of Bear football since its inception. In the 20 seasons of West Lincoln football there have been nine different men to lead the program. Can you name them all? Let’s ask Will if he can.

“Preston Gordon was there for the two years I played,” said Pepper. “Then there was Don Holsten and later a guy who came from Texas named Ron Dupree. Both of them were there just a year. Willie Brumfield has been the head coach two different times. Brooks Burns and Chris Calcote both coached about four years apiece. Obviously, you’ve got B.J. Smithhart who has coached them the last two seasons, but after that I’m drawing a blank.”

The best thing that’s probably ever been written about a coach leaving — not just from West Lincoln but anywhere in the county — was former Daily Leader Sports Editor Tom Goetz’s first-hand account of Dupree leaving Flea Hop like a race-car driver after accepting a job back in Texas where he had previously worked.

In May of 2004 Goetz wrote “DuPree taught world history and world geography at West Lincoln and lived in a small house on school property located next to the West Lincoln gymnasium/field house. With all of his belongings packed in his Honda Passport, DuPree left in a cloud of dust on Friday afternoon after school.”

DuPree finished 1-10 in his one season at the school.

News broke this week that the Bears will once again be hunting for a new coach as Smithhart was hired at Franklin County. Smithhart didn’t leave under the cover of darkness or in a cloud of Honda exhaust smoke. He applied, interviewed and was hired at a larger school as the head coach. Something that’s never happened with a departing WL coach.

A larger school that has had tradition in the past but has recently fallen on hard times, Franklin County was a combined 2-20 over the last two seasons. I have not seen the Bulldogs play during that stretch, so I won’t claim to be an expert about what has ailed them.

Other than Wilkinson County (8-4), the entirety of Region 7-3A was down last season. Hazlehurst finished 2-9 in 2018, Port Gibson was 2-7-1, and Jefferson County (6-4) was the only other team with a winning record in the region.

The last winning season for Franklin County was 2015 when Anthony Hart led the team to an 8-5 record. That team had a 54-man roster. Last season the Bulldogs listed 33 players on their roster. It would appear the school and program need someone to recruit the hallways and get participation numbers back up. A rebuild doesn’t happen overnight and this isn’t exactly familiar territory for Franklin County.

The Bulldogs have not had a head coach last longer than three seasons since Michael Goff retired in 2001 after 24 years as the head man in Meadville. Many of those changes came because coaches were using the Bulldogs as stepping stones to bigger jobs. Coaches handed off a strong program to the next head coach and the tradition continued. When that happens, the sting is relieved a little bit when the old coach has left their team, school, and community in better shape than what they inherited.

West Lincoln a program on the rise

That’s exactly what Smitthart has done. He’s left WL better than he found it. While I haven’t watched Franklin County over the last two seasons, I have watched West Lincoln. The first time I saw the Smithhart-coached Bears the thing that jumped out was how bought-in the community was. The bleachers were filled, and the fans were living and dying with every play. It helped that the Bear offense was fast paced and fun to watch.

The Bears passed for over 1,500 yards and finished 3-1 in their region in his debut season. They clinched the first home playoff game in school history with a 28-22 win over Loyd Star in their season finale. Bay Springs defeated the Bears 54-20 in the playoffs, but the green and white had momentum heading into 2018.

West Lincoln began 2018 with wins over Mount Olive and Salem, but an injury kept quarterback Travis Hall out of every game but those first two. The Bears still produced a pair of 1,000-yard rushers for the first time in school history, but the promise of the season ended short of the success of 2017.

Despite that disappointment, it was all still a long way from the team winning a combined seven games in the first 10 seasons of playing football or having a 25-game losing streak in the early days of the program.

Much praise belongs to the assistants who weathered coaching changes over the years to keep the team together. Coaches like Luke Addison, Steve Barrington, Brad Bland, David Gilbert, Jeff King and Randy Laird, who have either worked as current or former assistant coaches for WL football and put in long days and nights encouraging the young men that suited up for them.

The Bears have virtually their entire team returning next season. They have multiple players that have a future on the Division I level. West Lincoln is a program with momentum.

Smithhart will win at Franklin County

The decision to leave West Lincoln wasn’t an easy one for Smithhart. Anyone that would scoff at Franklin County hiring an up and coming coach from Lincoln County doesn’t remember their history.

In 2002 Franklin County hired Anthony Hart away from Loyd Star to replace their longtime coach, Goff. Hart stayed three seasons and went 29-8 in his first stint in Meadville.

I imagine there were some naysayers back then who thought, “why are we getting a coach from Loyd Star, that’s a step below us.”

The only difference in then and now is they didn’t have social media as a place to do their complaining in 2002.

I’m not going to attempt to predict a win total for Smithhart, but as someone who’s watched him work over the last two years, I believe he’ll find success at FC.

West Lincoln is in a position to compete for a region title next season, despite having to replace their coach. They lost only four seniors to graduation while county rivals Loyd Star and Bogue Chitto lost three times that many upperclassmen. Wesson will be a new contender to deal with in the district, but the Bears have never had a more promising outlook than the one they face today.

Perry Miller Field is ready for whoever will be next in the coaching line at West Lincoln and there isn’t a speck of red clay in sight.

Cliff Furr is sports editor at The Daily Leader. He can be reached at sports@dailyleader.com.