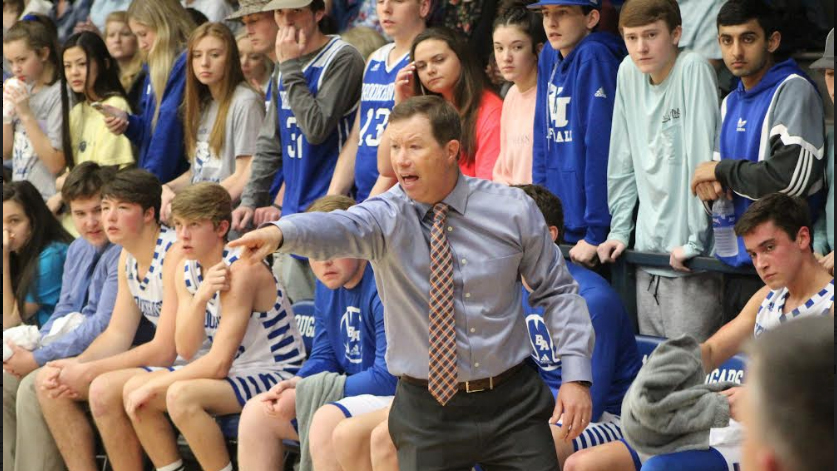 Photo by Cliff Furr Brookhaven Academy coach Josh Watts points directions for his team in the second half of their 68-27 win over Lamar Christian on Saturday night in the finals of the MAIS AA South State Tournament. Watts and the Cougars play at 7:45 p.m. on Tuesday at Benton Academy in the AA State Tournament.

You could see it on their faces after made baskets —fist pumps, shouting to themselves, and slapping hands with their teammates. The senior trio of Cade Brown, Dawson Flowers, and Tanner Thurman badly wanted a win on Saturday in the championship game of the MAIS AA South State Tournament on their home floor.

The Cougars (29-3) left no doubt as they whipped Lamar Christian School 68-27 in John R. Gray Gymnasium in front of a big home crowd. There were several factors motivating the home team in their matchup with the Lions. One was the reputation that LCS (22-9) carried into the game.

“They’re ranked as the No. 2 team in AA and we wanted to make a statement tonight before we got to the state tournament next week,” said Flowers.

The night before in the semifinals Lamar had beaten Clinton Christian 58-55 in overtime.

Another thing in the forefront of the minds of the seniors was the fact they were playing for the final time on the parquet pattern of their home court. The group had called the court home since beginning organized play as fourth graders.

“No telling how many games I’ve played on this court,” said Brown. “We wanted to make this last one a good one.”

Thurman knocked down a 3-pointer to put BA up 14-5 with two minutes left in the first quarter, sparking a timeout by LCS coach Michael Hall.

BA had active hands on defense all night. Lamar wanted to drive the ball to the basket and constantly found Cougar paws on the ball as BA batted possessions away that turned into easy layups.

Another thing BA does well is seal off the paint. LCA forwards Caleb Brown — a long, athletic eighth grader — and Donovan Smith could find no success trying to shoot over the outstretched arms of Flowers, Brown, and the Fortenberry brothers — Trey and Tyler.

BA led 40-20 at halftime. In the third quarter the Cougars committed to running their offense and being patient until open shots became available. That was by design.

“We didn’t want to come out firing and let them get back in it,” said Cougar head coach Josh Watts. “Our point guard Britton Nelson did a great job of working through our sets and we were able to get some layups against their man defense.”

Like their female counterparts, LCS has played a demanding schedule filled with larger MHSAA schools. The Lions had wins over 5A Pearl River Central, Sumrall, Greene County, and Purvis.

“We knew they are a good team,” said Thurman. “It felt like everyone was locked in a little extra tonight.”

Watts agrees with that evaluations.

“I didn’t have to say a whole lot to get them ready,” said Watts. “They were a focused group, that comes from having the senior leadership of Brown, Flowers, Thurman, and Sean Beard. Tanner hit an early 3-pointer to get us going and that always gives us confidence.”

Flowers scored a team high 20 points to lead the Cougars. He also grabbed nine rebounds and handed out six assists. Freshman Tyler Fortenberry came off the bench to score 16 points. Depth was the area the Cougars were much stronger in than the Lions in. LCS does doesn’t have the luxury of bringing two large forwards off their bench like Trey (6-foot-5) and Tyler (6-foot-3) Fortenberry.

BA next plays on Tuesday at Benton Academy in the MAIS AA State Tournament. The Cougars matchup with Greenville Christian in a 7:45 p.m. matchup.