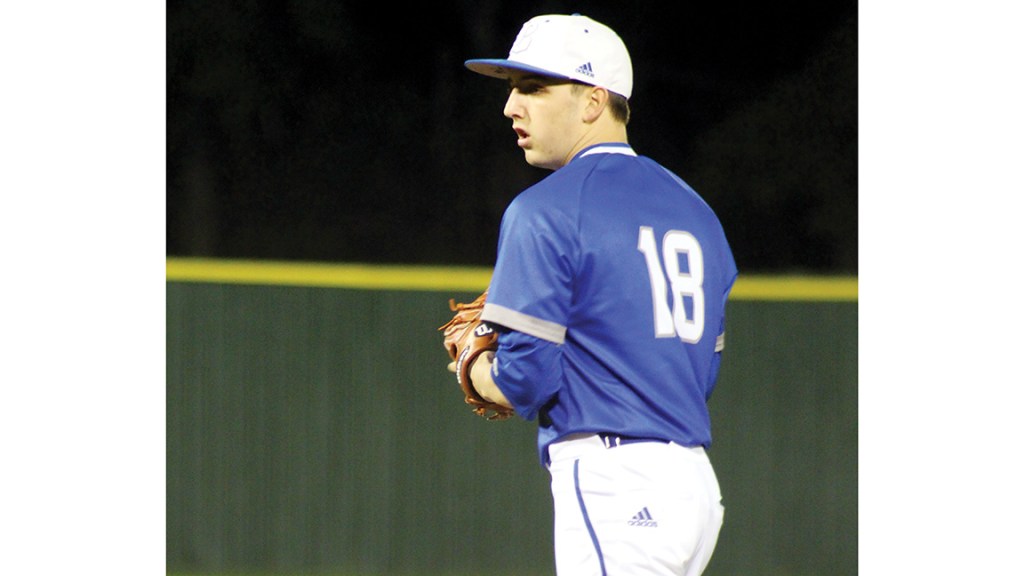 Photo by Katie Furr Brookhaven Academy Cougar pitcher Tanner Watts picked up the win on Monday when his team beat Silliman Institute 12-0 in the Parklane Tournament. Watts struck out four and gave up only two hits to earn the win.

Here is a roundup of area baseball from games played this week.

On Wednesday in the Lawrence County Tournament the Yellow Jackets (5-0-1) were matched up with defending 5A state champs Hattiesburg. Enterprise used 12 hits and 11 walks to smash the Tigers, 21-3.

“This is a big win for us,” said coach Cass Brister. “Austin Fugler pitched well for us and we finally hit the ball. Hopefully we can use this to our advantage going forward.”

The southpaw Fugler struck out nine and walked three in the win. Landon Gartman hit a double for Enterprise and Hunter Richardson hit a homerun. John Burns hit a single and a double. Trenton Tarver went 3-for-3 with two RBIs. Brodie Harris drove in four runs on two hits. Burns drove in three runs and Gartman pushed two across himself as did Fugler. Dylan Carter and Conner Hall also hit safely for EAC.

The Jackets will play at Hattiesburg Saturday in the Dr. Clemon Terrell Classic. They’ll play Lumberton at 1:30 p.m. and Jefferson Davis County at 6:30 p.m.

On Monday the Cougars (4-5) shut out Silliman Institute 12-0 and on Tuesday they beat Pontchartrain Christian 8-1. Both games were played at Parklane Academy.

In the win over Silliman the Cougars got a standout pitching performance from Tanner Watts. The left-hander only allowed two hits, walked zero batters and struck out four. BA pounded out nine hits led by Cade Brown with a double. Brown also walked twice and scored two runs. Dawson Flowers, Brady Spring, Collin Waldrop and Watts all had one hit apiece. Nick Ogden and Harrison Brownlee had two hits each for coach Tyler Parvin.

Judson Griffin, Michael Watts, Spring and Waldrop all had one RBI apiece. Watts, Brown and Ogden all had two RBIs each.

Griffin picked up the win on the mound against Pontchartrain as he struck out three and gave up one earned run in four innings. Spring hit a double for BA as the Cougars used seven hits and three Pontchartrain errors to score eight runs. Flowers, Watts and Catson Thompson all drove in two runs apiece.

The Hornets (5-4) dropped their final game at the Lawrence County Tournament on Wednesday, 8-7, to Hattiesburg.

Loyd Star led 6-3 after two innings but saw the Tigers break a 6-6 tie in the top half of the sixth with two runs to take the lead. The Hornets outhit the Tigers 12-9.

James Beard went 4-for-4 for the Hornets with two homeruns and two RBIs. Dane Smith and Logan Smith also added a pair of hits each for coach Jared Britt. Harrison Hux, Stephen Mills, Rials Hester and Dylan Case all also hit safely. Mills and Case drove in two runs each as Hester had one RBI as well.

The Cougars (5-2-1) won their region opener against Greene County in thrilling fasihion, 11-10, on Tuesday.

LC led 10-3 after three innings before GC scored two in the fourth, two in the fifth, and three in the sixth to tie the game at 10-10.

The final half inning started with Peyton Little drawing a walk for LC. He moved to third on a single by Landon Funchess. Two batters later Evan Lambert would hit a sac fly that scored Little and gave the Cougars the win.

Marquez Hudson and Tae Cole each drove in three runs apiece for LC and each homered in the win. Nelson hit a double and Hayden Mullins added an RBI.

LC returns the game tonight as they travel to Leakesville for a 7:30 p.m. matchup with Greene County.