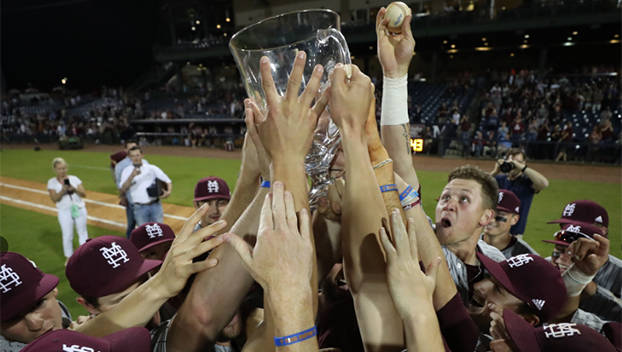 PEARL – A sentence no Ole Miss fan wants to read on this Tuesday night: Mississippi State has won the Governor’s Cup four years in a row.

Amid beautiful temperatures and record attendance at Trustmark Park in Pearl, no. 19 Ole Miss wasn’t able to hang on to their early lead, falling to rival No. 9 Mississippi State 8-1.

Despite a lopsided final score, runs were hard to come by early for either team.

Ole Miss didn’t get on the board until the third inning and it took Mississippi State until the fifth inning to score their first run.

Ole Miss’ only run cam from Grae Kessinger doing what Grae Kessinger has been so keen at doing lately. With Anthony Servideo standing on second after walking to get on, Kessinger squeezed a ball perfectly between the Bulldog third baseman and the left field line.

Kessinger’s double scored Servideo, putting the Rebels up 1-0 in the third. Kessinger is just about the hottest player in the country right now. With the hit, Kessinger has now reached base in 30 straight games and is hitting over .500 in the month of April.

Zack Phillips had one of his better starts this year in the loss. The lefty took a no-hitter into the 5th inning. What was State’s first hit was also their first run. Rowdy Jordan took Phillips deep to left field, breaking up the no-hitter and tying the game at one. The solo-shot catapulted what would be eight unanswered Bulldog runs.

“I thought Zack was terrific. It’s disappointing to waste that kind of effort,” said head coach Mike Bianco. “He gave us every opportunity to win the game.”

Max Cioffi allowed two straight hits once subbed in. State plated two runs on a hit to deep right field which Chase Cockrell misplayed and failed on a diving attempt. Mike Bianco would have to intentionally walk a Bulldog batter to give Austin Miller time to get warm and in the game. Cockrell wouldn’t record a single out.

Miller did the best of his inherited situation. One more State run would score in the inning on a sacrifice fly and he struck out the final batter, making the score 4-1 after six innings.

A handful of hits and an incredibly rare error by Rebel catcher Cooper Johnson allowed State to tack on three more runs in the seventh. By the end of the inning, the game was out of hand and chants of ‘Maroon and White’ echoed throughout the ballpark. State would get one more meaningless eighth inning run to put the final at 8-1.

“It’s disappointing. We just haven’t played well these last couple weeks, collectively,” Bianco said. “When the pressure got hot, we didn’t handle it. That’s not what you’re supposed to do with a veteran club. It’s disappointing.”

An interesting positive for Ole Miss late in the game was the appearance of reliever Greer Holston. Holston made his season debut in the game after dealing with what he described as a ‘dead arm’ earlier in the year.

The Rebel loss may mean a lot for bragging purposes and for postseason RPI seeding, but it won’t have any say on SEC standings. Both teams entered the game tied at 10-8 in the conference, but the neutral site game won’t count as a conference game. That said, it’s a great PR move, regardless of outcome, and a chance for Rebel (and Bulldog) fans in Jackson to see the teams without making the two-plus hour drive to Oxford or Starkville. The game’s 8,638 sold attendance broke the Trustmark Park attendance record.

With the win, Mississippi State has now won the Governor’s Cup four straight years. Since the game relocated from Jackson to Pearl in 2007, and underwent a name change, State leads the series 9-4.

Ole Miss returns to the diamond Thursday night for a three game series with No. 6 Texas A&M.

It took an extra inning to get it done but, in the end, it was the Loyd Star Lady Hornets... read more