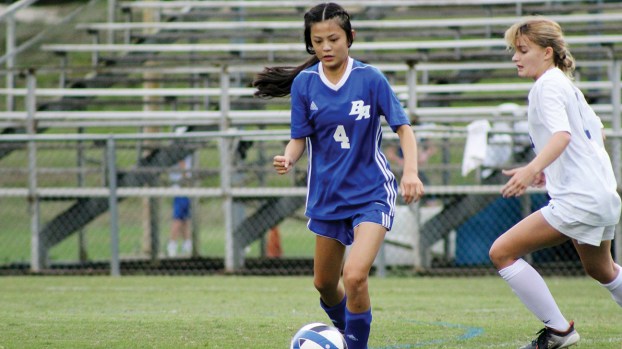 File photo Brookhaven Academy sophomore forward Anna Caroline Adams led the Lady Cougar offense this weekend at their kickoff tournament. Adams scored four goals in a win against Copiah Academy and three in a victory against Parklane. Adams and BA are back in action tonight as they host Oak Forest for a 6 p.m. kickoff.

The Brookhaven Academy Lady Cougars went 3-0 in pool play at their own tournament this weekend to advance to the championship match. In the finals BA dropped a 2-0 decision to Bayou Academy from Cleveland to finish as runners-up in the fourth annual Kickoff Classic Tournament.

“It was a great weekend of soccer,” said Lady Cougars coach Mark LeBlanc. “The fields were in great shape, KDMC took really good care of the student-athletes and the teams that played were all very happy with the tournament as a whole.”

BA senior goal keeper Olivia Lewis was a brick wall between the pipes for the home team as she pitched three straight shutouts to get BA into the championship match.

LeBlanc says that Bayou Academy senior Sydney Davis was too much for his team to slow down in the championship match.

“We’re strong in our area, but the teams from the Delta like Bayou and Washington have strong rec departments that feed those areas schools,” said LeBlanc. “That’s something that we hope to improve on in our area over the next few years. My girls played hard in the finals, but they just had a little more firepower.”

BA (6-2) hosts Oak Forest Academy tonight for a home match on R.M. “Red” Stuard Field at 6 p.m. Oak Forest is in a district with the Lady Cougars along with Cathedral and Adams County Christian.

“It’s a big match for us,” said LeBlanc. “We’re 1-0 in district and Oak Forest has a really solid squad. Winning our division is a goal of ours and this is one we need to win for that to happen.”