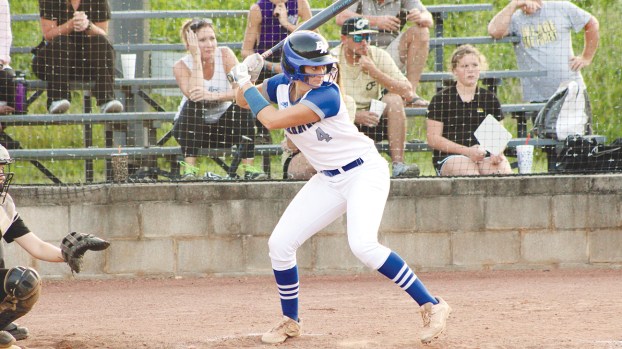 Photo by Cliff Furr Brookhaven Academy senior Hallie Creel loads up to swing just before smacking an RBI double Tuesday against Oak Forest. The Lady Cougars kept their division record perfect with a 5-3 win over OFA.

The Brookhaven Academy Cougars weren’t perfect Tuesday night against Oak Forest Academy in a key district game. They committed errors — seven in all. They left runners on base and only managed three hits for the game. What they were though was opportunistic. They made enough plays early and key plays late to hold off the Lady Jackets 5-3 in front of a big home crowd.

In the circle for Oak Forest was 6-foot-2 senior Emilee Casanova. Earlier this week Casanova signed to play next year for LSU softball. On Tuesday the Lady Cougars made her work at the plate as Casanova threw 101 pitches in six innings. She gave up three hits, one earned run and struck out four while walking two.

BA starter Madi Smith also tossed 101 pitches. She struck out 11 Lady Jackets and walked three. None of the three runs she surrendered were earned as Smith and her change up were baffling the OFA hitters.

The Lady Cougars struck quickly in the bottom of the first inning when Hallie Creel roped a double to center that scored Bailee Goodson and put BA up 1-0. The senior Creel is a Mississippi College commit and is tied for first on the team with a .492 batting average while driving in a team high 29 runs in 2019.

The big inning for BA was the fourth as they climbed to a 5-0 lead in the frame. Sophomore center fielder Madison Moak got the bats going with a one-out single. Moak finished the game with two hits.

An error then moved Moak to second and sophomore Abby Grace Richardson to first. Goodson then drew a walk to juice the bases and Creel subsequently walked to get her second RBI of the night.

Smith hit a sac fly to right that scored Richardson and moved Goodson to third and Creel to second. The bases filled again when Emily Claire Felder was hit by a pitch.

Another Oak Forest error was a costly one as BA senior Kaylie Burgess hit a ground ball that was handled for an error by the Lady Jacket third baseman. Goodson and Creel both came home on the error and coach Becky Flowers and her team had a solid 5-0 lead.

The rest of the game was about holding off an Oak Forest comeback. BA gave up their first run on an error in the fifth that made the score 5-1. Another error in the sixth pulled the Lady Jackets within 5-2.  Both times Smith responded to the mistakes to get the final out — a strikeout to end the fifth and a groundout to finish the sixth.

The pressure cranked up even higher in the seventh as an error put the first Oak Forest batter on and then Casanova blasted a ball to the outfield that put runners on second and third. After an error pulled OFA within 5-3 and with a runner on third, Flowers elected to bring in Felder to get the save.

After forcing a groundout of the first batter she faced, the hard throwing Felder quickly struck out two Lady Jackets to end the scoring threat, the inning and the game.

“Madi Smith had pitched a great game all night,” said Flowers. “Our defense had been shaky behind her and I put Emily Clare in so we could fix that. We were better defensively with Madi at third and Hallie moving from third to first. With the tying run at the plate, we had to have our defense in the best position to end it.”

The win moves BA to 18-3-1 and puts them in the driver’s seat of the district as they are 5-0 with games left against Cathedral, Silliman and a rematch with Oak Forest in Amite City, Louisiana, later this month.

Next week the Lady Cougars will host Columbia Academy on Monday and Parklane on Tuesday.