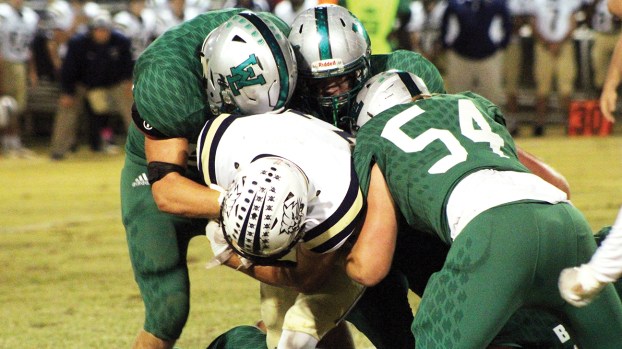 Photo by Cliff Furr West Lincoln and Bogue Chitto both have lots to play for tonight as the Region 7-2A regular season comes to a close. The Bears would love to make history tonight with their first win over Amite County in program history. The Bobcats host Loyd Star in the annual Possum Bowl.

Wesson is the Region 7-2A champ and will enter the playoffs next week as the top seed. Everything else is still up for grabs tonight as the division finishes the regular season with playoff spots on the line.

Everyone in Lincoln County — Bear and non-Bear fans alike — wants West Lincoln to beat the Amite County Trojans tonight. Coach Brad Bland and the green and white wearing Bears (5-5, 2-2) are facing an Amite County (5-5, 3-1) team that has only lost to Wesson in region play.

Last season, a win by Loyd Star over Amite County broke a 20-game win streak that the Trojans had against Lincoln County schools.

Brothern is the leading rusher in program history and Jackson will be the first Division I signee from West Lincoln when he inks with Mississippi State.

Depending on what happens in the other games in the division and if West Lincoln wins and by how much the Bears could finish in second, third or fourth place in the final standings.

Region 7-2A is matched up with Region 8 in the first round of the playoffs. All that is set in that region is that East Marion (7-2) has clinched the top seed and will host whoever finishes fourth in Region 7 next week.

North Forrest, Perry Central, Collins and St. Patrick are all vying for the final three spots in Region 8-2A.

Vaughn is just 50 yards away from rushing for 1,000 yards in the final season of a strong high school career.

Wesson and coach Jeremy Loy will hope to get out of the game with no injuries as they prepare to most likely host North Forrest next week in Stone Stadium — barring an unforeseen outcome in the Region 8 games tonight.

What better way to finish the regular season than with the biggest bowl game played every season in Lincoln County — The Possum Bowl.

There’s a lot riding on the game tonight for the homestanding Bobcats as they have the potential to end up second in the region depending on how things shake out in the West Lincoln game.

A young Loyd Star squad coached by Brian Ford would love to play the role of spoiler after winning the division last season with a large senior class.

The senior class that will be honored on Troy Smith Field prior to the game consists of Shaw King, Zach Upkins, Jermarco Walker and Brandon Black. That group is a big part of the Cats playing their best football late in the season.