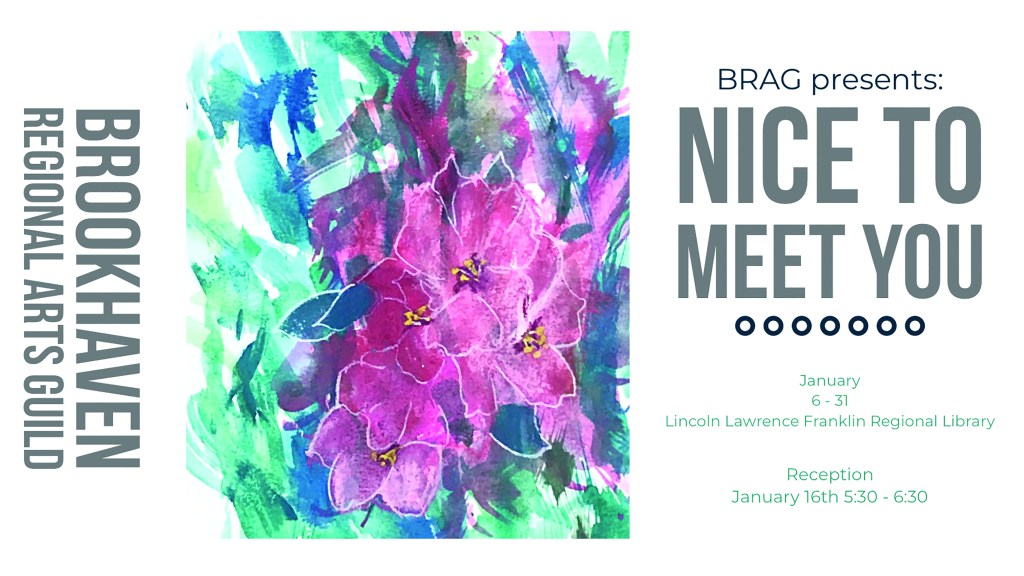 Artist and Copiah-Lincoln Community College art instructor Janet Campbell Smith is the newly-elected guild president and artist Derek Covington Smith is vice president. Smith and Smith — no relation — are excited about new things coming for the guild, beginning in January.

Nice to meet you

“We have asked our guild members to create a small collection of their work that they feel expresses who they are as artists. Along with this, we issued the challenge to create an ‘Artist Statement’ to further explore the artists’ own connection with their art, and to give others a glimpse into their creative world,” said Derek C. Smith. “These small collections along with their statements will be on display Jan. 6-31 at the Lincoln County Public Library. A reception and membership drive will take place Jan. 16, 5:30-6:30 p.m., where you can meet the artists and members of the guild.”

The guild began more than 20 years ago as a part of the Brookhaven Arts Commission under the Brookhaven Trust, focusing on art, music and drama. It has since become the Brookhaven Regional Arts Guild and has primarily focused on shows, hands-on learning and an annual competition.

“Brookhaven is kind of in its own Renaissance,” Derek C. Smith said. “We want to take a step forward in the community and build on that.”

Guild leadership has several goals and plans in place for the coming year.

• Goal: To focus in part on younger artists, partly by reintroducing the Junior Art Competition in 2021.

• Goal: To create participation and interest through the implementation of pop-up shows. “The Exhibitionists” will find smaller locations for temporary art shows. if you have an empty or unused building to show off, a pop-up show can help bring attention both the location and to the guild and its artists.

• Goal: To have plein air — “outdoor” — drawing and painting sessions, collaborating for an August show.

“All this takes money,” Derek C. Smith said. “In order to do great things, we need great people behind us.”

“We want everything we do to be better, and higher quality,” said Janet C. Smith, echoing the need for funding in order to accomplish the guild’s goals.

The guild meets monthly. Every other month, the meeting will be an active demo — educational and technique-based.

The guild is ready to get more involved with the community and needs the community’s support. With the membership drive, pop-up shows, new library collection and other plans, there will be plenty of opportunities for the community and guild to mesh and grow together in the days ahead.