Lady Bears advance to 2nd round of MHSAA 2A playoffs 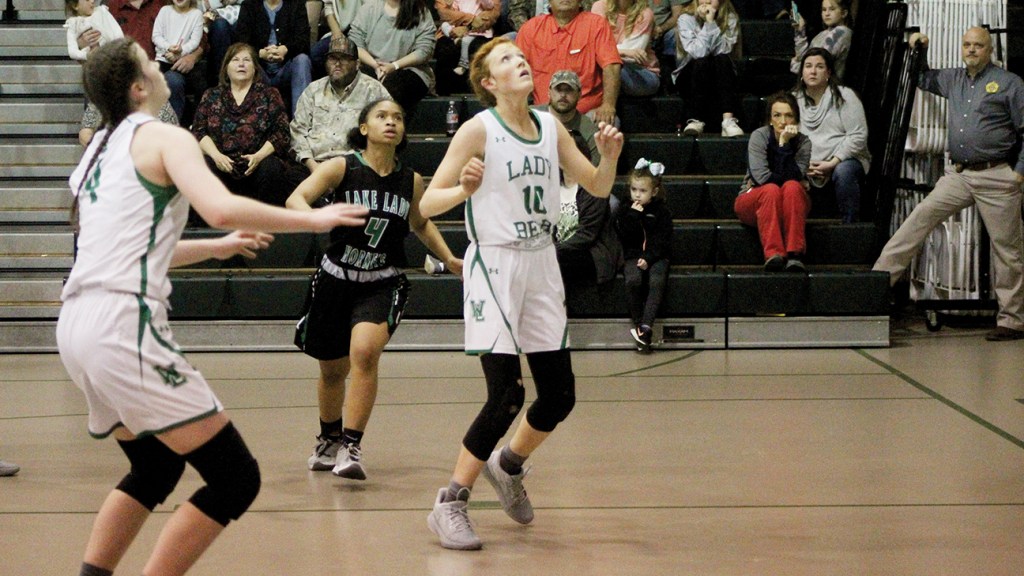 Photo by Cliff Furr West Lincoln senior guard Jena Hughes (No. 10) and teammate Kara Beth Addison wait on a rebound Monday against Lake in their MHSAA 2A basketball playoff matchup.

When the West Lincoln Lady Bears break their huddle before and after games, they end it with two claps and a Ric Flair.

Ric Flair as in the 20-time world champion wrestler — the one knowing for yelling “WOOOOO.”

Monday after beating Lake 57-54 in the opening round of the MHSAA 2A playoffs in Jack Case Gymnasium — that post game “WOOOOO” was one of relief as the game was a tight back-and-forth battle between two school known for wearing green and it came down to the final possession.

“I’m proud of the girls for gutting it out,” said WL head coach Brooks Smith. “With everything we’ve faced in the last few weeks — and really all year — we keep finding a way. Going forward, we must limit our turnovers and make our free throws.”

The Lady Bears were 18-for-36 from the free throw stripe and committed 21 turnovers in the game.

Lake (11-10) finished as the no. 4 seed in Region 6-2A, but that position is a little misleading of what the team was capable of.

West Lincoln led 15-14 after the first quarter, but never looked comfortable in the early going as the teams swapped the lead throughout the quarter.

Part of that looked like nerves as the Lady Bears were playing for the first time in 10 days after knocking off Loyd Star 56-50 in the Region 7-2A tournament finals and then having their game against Lake delayed a week by the artic weather of last week.

A big part of what went wrong for West Lincoln early on was dictated by Lake though. The Lady Hornets played fast and often doubled teamed West Lincoln sophomore point guard Kara Beth Addison when she crossed half court.

Trying to dribble through the Lake press defense meant trying to negotiate a sea of reaching, slapping hands bent on getting to the ball.

With the game tied at 25-25, senior forward Brittany Sturkey hit a pair of huge 3-pointers 90 seconds before halftime that gave the Lady Bears some needed breathing room.

After Sturkey’s second 3-pointer — from the same exact spot of her first — rattled in, the West Lincoln lead was 31-25, but by the halftime break Lake had trimmed it to two points —31-29.

Lake would never lead in the second half, but they’d also never let West Lincoln slow the game down or milk the clock.

One area where Lake repeatedly hurt West Lincoln was on the offensive boards. The Lady Hornets grabbed missed shot attempts for multiple put backs at the rim.

They were also especially good at stealing possessions by grabbing offensive rebounds on their own missed free throws.

In the third quarter the Lady Bears clamped down defensively as they held Lake to just five points — WL led 44-34 after three quarters.

They trailed 53-47 with three minutes left and then a minute later they banked in a 3-pointer to make the score 55-51.

A turnover with 9.6 seconds remaining gave Lake the ball back with a chance to tie, but Addison blocked a 3-point attempt and the Lady Bears regained possession.

With just 2.3 seconds remaining in the game, all West Lincoln needed to do was get the ball in securely to wrap up the win.

A long pass to half court was grabbed by Lake but the Lady Hornets weren’t able to get off a final heave before the horn.

Addison scored 11 points, handed out six assists, made four steals, grabbed three rebounds and blocked one shot for West Lincoln. Her three field goals in the fourth quarter were the only made shots from the floor for WL in the final eight minutes.

The sophomore trio of Madilyn Case, Mailey Kate Young and Mary Claire Johnson came off the bench to score thee, two and one point each respectively.

Besides dealing with the weather and COVID-19 and all that’s come with the territory of the last 12 months — Smith also lost his father Alton on Feb. 12. His services were held earlier in the day Monday and the West Lincoln team honored his memory prior to the game.

An alumnus of the school, Smith has coached the Lady Bears to a first-round playoff win in each of his four seasons as head coach. His love of all thing’s basketball can be traced directly to his father and growing up in a county that reveres the sport.

“My family and I appreciate the support the West Lincoln community and the surrounding areas has shown to us with the passing of my dad,” said Smith. “He loved the game, and he loved watching anyone excel at the game, because he knew what it took to be great at it — practice.”

West Lincoln hosts East Marion Wednesday at 6 p.m. in a second-round matchup. The winner will meet the winner between St. Patrick and Union in a quarterfinal game Friday.