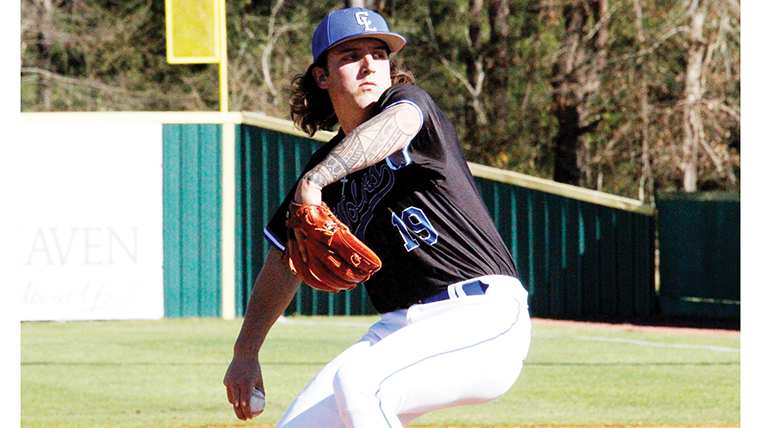 Photo by Co-Lin Sports Info Co-Lin freshman pitcher and Brookhaven Academy alum Tanner Watts delivers a pitch to the plate Wednesday against Southwest. The Wolves are back at home Saturday hosting East Mississippi.

It’s almost eerie how similar the script was for Co-Lin’s sweep of Southwest Mississippi C.C. Wednesday in Wesson when compared to the first meeting between the schools back on Feb. 3 in their opener.

Just like in that first meeting, Co-Lin won a high scoring opener — this time by a 15-12 final. And just like in that earlier series, Co-Lin cruised to a win in game two by taking an 11-1 victory.

The Wolves have now won 11 straight over their rivals from Summit.

In game one, Southwest built an 8-2 lead after three innings.

In the fifth, the Wolves pulled to within 11-9 on a grand slam by infielder Tom Biggs. Biggs is an LSU transfer who prepped at West Monroe High School.

It was a 3-run home run by Will Lawson Harkins (Leake Academy) that tied the game at 12-12.

Another longball put the Wolves ahead for good when Peyton Parker led the seventh off with a solo homer.

In game two, it was Marquez Hudson (Lawrence County) who punched one over the Sullivan Field fence for the Wolves. His two-run homer in third was part of a six-run inning for CLCC.

Parker — a sophomore from West Ouachita High School — picked up the win on the mound in game two. He only gave up three hits and struck out seven.

Co-Lin hosts East Mississippi Saturday for a doubleheader that begins at 2 p.m.