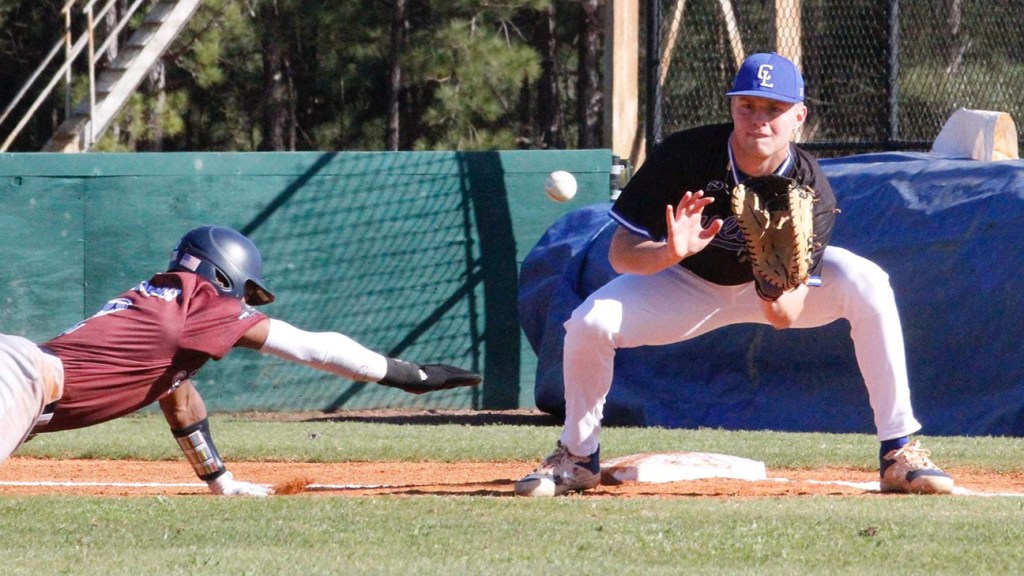 Photo by Co-Lin Sports Info Freshman infielder Kenner Bizot accounted for all three RBIs Thursday in a 3-0 win for Co-Lin over visiting Mississippi Gulf Coast. The Wolves are back in Wesson Sunday hosting Northwest Mississippi in their final home series of the season.

Co-Lin sophomore Marquez Hudson is a dinger mashing machine. Hudson hit his 10th home run of the year Thursday in dramatic fashion as his 3-run shot in the bottom of the ninth gave CLCC a 9-7 walk-off win over Mississippi Gulf Coast in Wesson.

A Lawrence County product, Hudson’s homer was one of 25 combined hits in the game. The nightcap saw CLCC take a 3-0 victory a seven-inning game.

Co-Lin led 6-2 heading into the top of the ninth before a Gulf Coast barrage put the Bulldogs up 7-6 before the final plate appearances of the game for the Wolves.

Sophomore Peyton Parker (West Ouachita, La.) hit a double with one away to start the Co-Lin rally. The next batter, LSU transfer Tom Biggs (West Monroe, La.) walked prior to Hudson’s at-bat.

“Marquez has been in a little slump over the last couple weeks, but he broke out of it tonight,” said CLCC skipper Clay Smith.

The game was scoreless until the top of the fourth when MGCCC got their opening run via a solo home run.

Hudson also smacked a one-run homer in the bottom of the seventh to increase the Co-Lin lead to 6-2.

The loss snapped a five-game win streak for the Bulldogs.

Biggs started on the mound for the first time this season and only needed 45 pitches to get through 4.1 innings of work. He gave up three hits, struck out three and gave up just one earned run. Brookhaven Academy alum Tanner Watts tossed two innings and gave up four hits and one earned run while also striking out three.

Gulf Coast got a solid start on the mound from their BA alum, sophomore Dawson Flowers, in game two. A recent commit to continue his career at Northwestern State University in Natchitoches, Louisiana, Flowers struck out seven, walked one and scattered five hits. He gave up three earned runs on 93 pitches over six innings.

Parker was just too good for Co-Lin in game two as he’ll finish his career as one of the best two-way players for the school in recent memory.

He threw 102 pitches and gave up four hits while striking out 11 and walking none. It was the sixth complete game on the mound this season for Parker.

“We know what we are getting out of Peyton Parker every time he steps on the field,” said Smith. “Whether it’s on the mound or as a position player. He is big time strike thrower that never gets rattled.

At the plate, he hit two doubles. Parker’s first inning double was followed by a single from Biggs that moved him to third. Biggs then gained second on a passed ball.

With two outs freshman Kenner Bizot (Wesson) hit a single that scored the pair and put CLCC up 2-0.

Parker again doubled to start off the sixth and again crossed home plate via the bat of Bizot, that time on a sac fly.

The losses moved Gulf Coast to 17-13 overall and 14-8 in MACCC play. The Wolves took three-of-four from MGCCC in their season series.

Co-Lin is 14-10 in the MACCC standings and 18-18 on the season. Pearl River and Itawamba lead the league with identical 17-5 marks on the year.

The Wolves will host their final home series of the season Sunday against Northwest Mississippi. The first game of the doubleheader starts at 2 p.m.