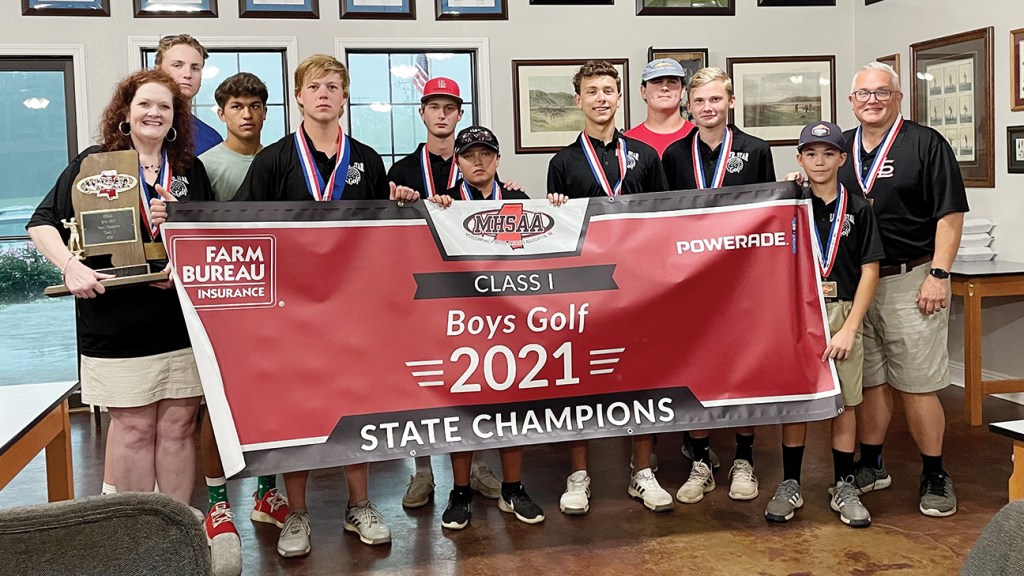 Trailing by 11-strokes after the opening day, things didn’t look great for the Loyd Star golf team this week at the MHSAA Class I State Tournament hosted by Wolf Hollow in Wesson.

Loyd Star was coming off a winning effort in the region tournament but had hit the ball all over the course in the first day of state tournament play.

Wesson was in the top spot and Tupelo Christian held the second-place position. LS golf coach Chris King, who leads the team with his wife Lydia, just hoped for a better showing from his guys on day two.

King got all that and more as the Hornets were 10 shots better on day two than they had been the day before.

Both Wesson and Tupelo Christian saw their scores go up on day two, which allowed the Hornets to edge out their rivals from Wesson by three strokes to take the state title.

“It was just an awesome experience for our boys,” said King. “I knew we were better than how we played the day before, but I wasn’t sure how we were going to respond. The really cool thing is that a couple seventh graders had some of the best second day improvements for us.”

Each team is allowed to send six golfers to play each round. Only the top four scores from each round are counted for the daily total. The two daily totals are then combined for the final totals.

Loyd Star’s two-day total was 674 while Wesson finished with 677. Tupelo Christian and Pisgah each finished with a 688. There were nine teams playing in the tournament.

Individually the match medalist — player with the lowest two-day total — was Raines Walker of Madison-St. Joe.

King mentioned a pair of seventh graders that turned it on for day two. That would be Thibodeaux and Case.

Hester again led Loyd Star on the second day with is 77. Case shaved eight shots off his first day total by posting an 85 on day two while Thibodeaux brought his score down three shots with an 83. The most dramatic improvement for Loyd Star came from one of their most seasoned players — senior Douglas James.

James hadn’t had his opening round used in scoring as he finished with a 100 that day. James bounced back to finish with an 87 for his second round though.

Byrd’s 75 led Wesson on day two. Brewer shot an 80, while Loy carded a 96. Connor Bradford also had a 95 for Wesson coach Bobo Douglas.

It’s the second state golf title for Loyd Star, the first since a 2002 team coached by Ricky Myers won it all.

The Hornets originally had 12 matches scheduled for this season, but only could get five played due to wet weather throughout the spring.

Chris King says his team’s greatest strength is their love for the game.

“These aren’t guys who set their clubs down when the season is over and don’t pick them back up until golf season rolls around again,” said King. “They’re the type of kids that are playing constantly with their fathers and grandfathers and take the game seriously. That’s what makes this group special.”