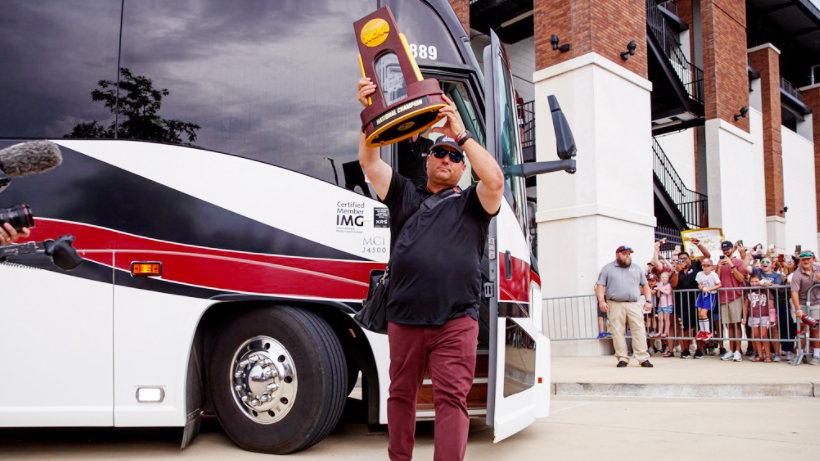 Photo by MSU Athletics MSU head coach Chris Lemonis made great decisions all season to bring a national championship back to Starkville for the first time in school history.

If you love all the things that make sports fun, all the escapism that athletics provides us — then how could you not love the run Mississippi State made to the college baseball national championship this week. Even if you have an Archie Manning jersey hanging in your closet, there were storylines worth following on this team.

A strong dislike of Vanderbilt baseball might be one of the few things that can truly unify fans of both MSU and Ole Miss.

The Commodores were defending national champs and SEC schools have long complained about the advantages the private school in Nashville has in baseball.

The NCAA — an organization that makes bad decisions and policies on the regular — limits college baseball programs severely when it comes to scholarships.

Teams in Power 5 conferences get 11.7 scholarships to divide among 27 scholarship athletes on a 35-man roster.

Football teams at that level get 85 fully funded scholarships.

Critics have felt that Vanderbilt skirts the rules using a financial aid initiative called “Opportunity Vanderbilt” that has a goal of making sure that any low-income student admitted to the school isn’t kept from attending due to their financial shortcomings.

Fellow college baseball powers argue that Vanderbilt uses that program to their advantage in recruiting and head coach Tim Corbin has admitted to as much in the past.

Take that general disdain for the Commodores and then add on some more spite for how they reached the championship series this year.

To be fair, it was another much-criticized NCAA decision that put Vanderbilt in the finals as the organization revealed positive COVID-19 results on NC State just prior to their semifinal matchup between the two teams.

The NCAA at first made NC State play Vandy shorthanded and then in an early AM announcement they booted the Wolfpack from the tournament.

Over 20,000 people in the stadium. No masks in sight. But sure, send NC State home even though some of those players that tested positive had been vaccinated.

Vanderbilt didn’t put NC State out, the NCAA did.

That felt like another hand-out for the Commodores by the NCAA to MSU fans that saw their team battle toe to toe with Texas to get into the finals while their opponent walked into the championship series.

Maybe you’re not an alum of MSU, but just someone that just loves to see players from this state on the big stage.

The Bulldogs has the reach to recruit nationally and they do, but 15 players on the roster are from the Magnolia State. That’s five more than Ole Miss and one more than Southern Miss.

They hail from places like Crystal Springs, Raymond, Richland and Brandon. Places you pass through regularly or possibly have family in.

It’s reminder that the men wearing maroon and white aren’t some superheroes from another planet, they’re regular Mississippi raised kids that were probably playing Dixie Youth All-Stars this time of year not too long ago.

Maybe you’re someone that roots for products of our state’s community college system. As one myself, I always pull for the guys that came up through the JUCO ranks, regardless of where they play.

MSU coach Chris Lemonis knows what a great league the MACCC is as evident by the six players on the roster that are Mississippi community college alums. There are also a handful of JUCO products on the team that played in leagues outside our state.

Even a baseball neophyte could see that Lemonis was nothing short of masterful in how he handled his team all season long. He made adjustments, benched older players that weren’t hitting, shuffled who played where and gave the bullpen opportunities to grow and deepen as the year progressed.

There are just a small group of college baseball jobs in America that come with the type of expectations put on the head coach at MSU.

The program has history, tradition, the best facilities and fans that turn out to watch fall scrimmages like they’re SEC tourney games.

Dig online and you can find old posts of some of those fans bemoaning AD John Cohen hiring Lemonis away from Indiana University in 2018.

That’s not surprising. I’ll never forget the MSU alum who messaged me when Vic Schaefer came to town. The fan — one I’d grew up with — was worried about the hiring of Schaefer as he said that the coach had never been in charge of a program at a school on par with the SEC.

You know how that one turned out; all Schaefer did was win in Starkville.

Lemonis won at Indiana and lived up to that high bar by taking MSU to the CWS in his first full season and winning a national title in his second full year. Including the COVID-19 shortened 2020 season, Lemonis is 114-37 overall in Starkville.

Some of those same Chicken Little like fans were freaking out when State went 0-2 in the SEC Tournament as they were pounded by Tennessee and Florida this year.

Lemonis doesn’t know what he’s doing they said. This team has too many holes, they typed.

There’s a reason he’s a head baseball coach in the SEC and those critics are posting on Twitter accounts with less than 60 followers.

Expect him to get the biggest raise that Cohen can put before him sooner rather than later.

Even if you kept up with MSU or SEC baseball just a little bit as in you’re the most casual of casual fans — then you probably still know who the big dogs are on this MSU roster.

Bedner is the epitome of those words. His team needed him to deliver on short rest in the deciding game of the national championship series and all he did is throw six innings of no-hit ball.

The commentators said early that you could see the fatigue and that maybe his stuff wasn’t as sharp as it had been against Texas in the semifinals. It looked real sharp to the Vanderbilt hitters though.

Check out at his combined stat line from his three starts at the CWS. 18.1 innings, three earned runs, five hits and 26 strikeouts.

He’s draft-eligible so add Bedner alongside Lemonis on the list of people who are about to get paid.

The last two games of the championship series felt a little surreal to watch. The way MSU rolled through Vanderbilt in a stadium full of maroon and white chanting fans, it was almost too perfect.

If you listened to the national media and watched their reactions online and talked to people who were there, it felt like — with the exception of those loyal to Vanderbilt — the whole nation was pulling for MSU.

The whole nation, pulling for Mississippi to win something?

Jim Ellis has been calling Mississippi State baseball on the radio for 43 years. His words after the final out Wednesday perfectly summed up the week and the night for fans of the school and team.

“We win it,” said Ellis. “We as in all of the maroon and white everywhere. Celebrate a national championship with a ball club that’s so resilient, has had a great postseason, never had any doubt in their minds that they could do it — and they’ve done it.”

Regardless of where your allegiances may lie as a fan, this was a team and a moment truly worth rooting for.