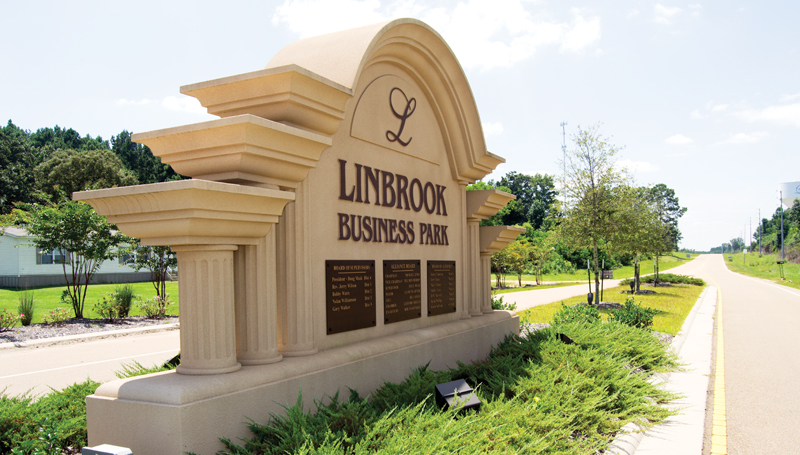 In the late 1990s/early 2000s, the local community decided to make an investment in their future. Seeing that there was no room for industrial expansion, community leaders decided to start a new venture.

Bill Jacobs, chairman of the Brookhaven-Lincoln County Industrial Development Foundation, said the Brookhaven Lincoln Industrial Park was running out of available space for new industries so local officials looked at areas around Lincoln County for possible investments and decided to create a mega-site called Linbrook.

At the time, Linbrook Business Park was the largest industrial site in Mississippi. The more than 1,000 acres of land is located on Brookway Boulevard close to Interstate 55’s exit 40.

The county and city jointly took out a bond to purchase the property in 2005. Both entities asked for $1.6 million. In 2006 they took out another bond for construction on the property, each netting $2.2 million. The federal government also contributed more than $1 million to the project. Some private donations were also collected. The combination of funds makes the entire cost for the project over $7 million. The property bond will be paid off in 2025 and the construction bond will be paid in 2026.

The property is marketed by the Brookhaven-Lincoln County Chamber of Commerce and Brookhaven-Lincoln Economic Development Foundation. It is railroad accessible, has a million-gallon water tower, 8,000 feet of new roads, and water and sewer lines as well as fiber optics. All that is missing is the industries.

After the property was made ready, the community was abuzz about the new park’s construction with hopes that a huge company like Toyota would plant its roots in Linbrook, but in 2008 the recession hit. Nothing new was being built throughout the United States. Today the property remains ready but empty.

The Mississippi Development Authority posted on their website that the state is in the top 10 for doing business, No. 2 for competitive utility costs and permitting speed and in the top five for reasonable overall cost of doing business and labor costs, yet Linbrook has remained empty for years. According to the MDA, there are over 350 industrial sites in Mississippi, including several other available mega-sites across the state.

“It’s intensely and fiercely competitive for new industrial locations; you can see that just about anywhere,” said Garrick Combs, executive director of the chamber. “There is still some fear in the economy and there are still some companies sitting on a lot of cash. There is a lot of fear in the market to see if we’re on a sustainable path of growth.

“So, if there are less projects on the market and more communities in that market to attract them, we have to make sure we compete.”

There are dozens of sites looking for the same big businesses. Combs said that Linbrook has a steady stream of people looking and discussing the property though.

Jacobs says they are being patient and waiting for the right industry to move into the spot. He said even though the process has not be as fast as they would like it to be, a lot of thought has been put into it – it didn’t just happen over night.

“We have to have property for industry to look at,” said Tillman Bishop, Lincoln County chancery clerk. He compared marketing an industrial site like Linbrook to grocery shopping. If you want to buy bread, and the store you are in doesn’t have bread, you go to another store. He added that to have companies look at Lincoln County there has to be an existing site available or else they will just walk out of the store.

“Sometimes these projects take a long time and have to be developed in certain way,” said Combs. “The first formal proposal I made to American Railcar was the day after the Saints won the Super Bowl and we did the ground breaking in Brookhaven in April of 2013. Some of the seeds that have been planted take a little while to grow.”

Even though there has not been visible activity on the site, Combs said that there is always some kind of activity going on. People are viewing the property and he is consistently marketing the area.

“Some times it happens quickly, sometimes it takes a long time, that’s just the way economic investment is,” said Bishop.

When a company is viewing a property, there are many factors that they examine. They look at the distance from their target market, from raw material or even the shape of the property. In the highly competitive market, businesses are able to be picky. Fortunately, local officials are being somewhat selective as well about what type of industry will be allowed in the community.

“It’s a matter of finding a compatible project that is out there with what we have to offer,” said Combs. “I don’t think at this point there is a “negative” push factor away from Linbrook more so than a company may have been able to identify a pull factor to another site. There isn’t a negative sales factor in Linbrook versus it may just have been some of those circumstances beyond our control that pulled them to another site.”

Jacobs, Combs and Bishop stressed the importance of Linbrook as a future investment in for the community. If Linbrook were not available, the possible growth of Brookhaven would be stunted.

“The leadership of the community then and now, I think, should be praised for having the foresight to say, ‘We’ve been so successful as a community to fill up the industrial park that we better plan for our future for the next one,'” said Combs.

Combs was not able to comment about the area’s current prospects, but he said that over the past several years the site has been shown to multiple companies, and he is still communicating with some of them.

“Linbrook business park is an essential asset to this community,” said Comb. “We are going to continue to market that piece of property as our main industrial asset.”

Community leaders remain optimistic about the future of Linbrook. They are positive that some day the site will be used and are remaining confident the right industry will come along. The property has created a platform for new or expanding industry to always have a place in Brookhaven.

Bring your popcorn and enjoy the movie

After a successful effort by the Friends of the Library to get projection equipment installed, the Lincoln County Public Library... read more