Alligator ditch a source of concern for residents 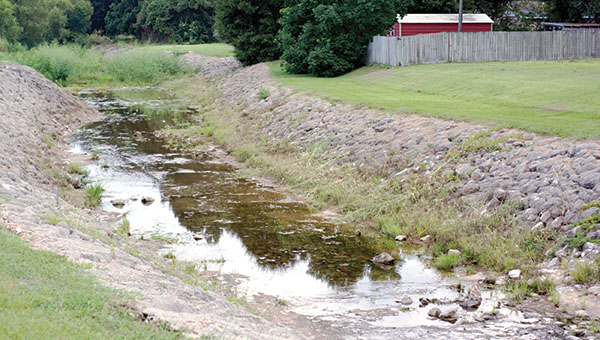 DAILY LEADER / KATIE WILLIAMSON / The growth and stagnant water in the ditch near the Halbert Heights neighborhood is an ongoing issue for local residents.

Editor’s Note: After a story was published Tuesday about an alligator being captured from a drainage ditch near Avenue A, a reader posted on The Daily Leader Facebook page, saying that he had tried unsuccessfully for years to get officials to do something about problems with the ditch.

The ditch where the gator was found has been a source of problems for the neighborhood for many years.

George Linton, son of Ethelene Starrett who lives on the property where the alligator was found in the ditch, said that the sluggish water channel, which has partially filled up with weeds and other growth, has become a safety hazard, and he is concerned that it detracts from the property value of the nearby homes. The stagnant water and unkempt area is a breeding ground for mosquitoes, is hard to mow around and the water is seeping into nearby property, Linton.

Starrett said that when her family built their house on the property in 1985, the area around the ditch was well maintained by the city. The grass was cut and trimmed and the ditch was cleared. She said that over the past decade there has been no progress made in the area and the area is getting worse with each passing year.

“We’ve got kids around here who play in the ditch,” said Starrett. “I constantly caution them that someone is going to get hurt.” She added that she worries about mowing the yard close to the ditch because of holes that have formed around the ditch.

Starrett said she has been trying to work with Ward Four Alderman Shirley Estes to do something about the ditch. Starrett said the Halbert Heights neighbors recently pleaded with Mayor Joe Cox, and she hopes that the situation will be resolved soon.

At Tuesday night’s board of alderman meeting this week, Estes turned in a work order to have the ditch cleared.

Estes said the city has applied for previous grants to fix the property, but they always got turned down for the money.

“To receive the grant, the ditch must be encroaching on the foundation of a residence,” said Estes.

She added that it is very difficult to keep the many miles of ditches across the city maintained.

Many of the ditches are on private property, and Estes said that it is hard to know which areas have easements that would allow the city to clear them. She added that cleaning the areas sometimes involves heavy machinery on people’s property.

Estes has spoken with the property owners around the Halbert Heights ditch and is continuing to work on the area. She added that if Brookhavenites have any issues that involve the city they should contact their alderman.

To submit a question about a problem or other matter of interest on pubic property to the “You Asked” column, please email news@dailyleader.com. Please include the words, “You Asked,” in the email subject line. You also can call the newsroom at 601-833-6961, extension 133. Photos also may be submitted through email.