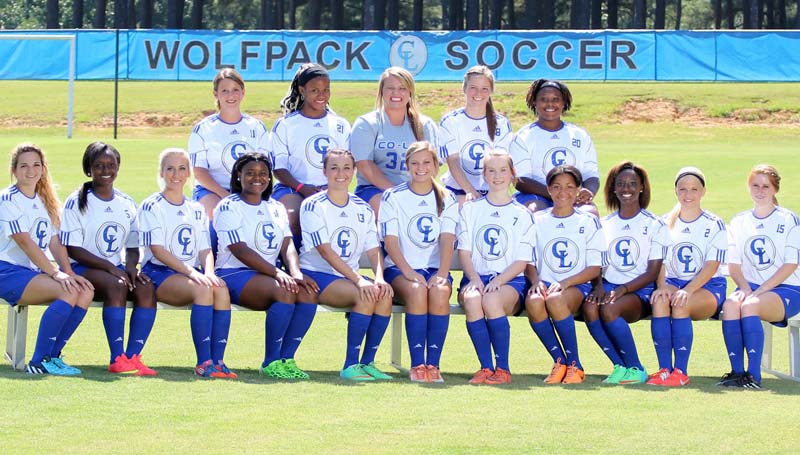 WESSON – With only two sophomores returning to the team in 2014, Copiah-Lincoln women’s soccer coach David Strother hopes his 14 freshmen can grow up quickly for the Lady Wolves.

“We’re in a similar situation as last year, having a mostly freshmen team, but I’m very encouraged by how hard this group of players is working,” said Strother.

Temper Russell of Magee, one of the two sophomores along with forward Hannah Linnell, sees the team gelling well in preseason practice. “I really like the chemistry we have,” said Russell. “We’re sharing the ball and coming together on and off the field.”

Strother will need a strong season from Linnell, who was one of the best forwards on the team in 2013. “She’s bigger, stronger, faster, and more aggressive as a sophomore,” said Strother. “The key is going to be staying healthy, something she struggled with in her freshman season.”

One thing that encourages Strother is the high level of high school played by some of his incoming freshmen. Two freshmen forwards in particular have caught Strother’s eye, Ashley Boler and Si’Edriq Middleton.

“Ashley played at D’Iberville and she’s show aggressiveness around the goal that I like,” said Strother. “Si’Edriq produced a lot of offense when she played at Franklin County. She’ll be a key for us at midfield and forward.” Middleton posted a hat trick of goals for the Lady Wolves during the annual Black and Blue Alumni Match.

The goalkeeper will be West Lincoln product Destiny Allen. Allen played soccer at Brookhaven Academy before transferring to West Lincoln. Strother likes the attitude and toughness the former basketball player brings to the net. Also working at goalkeeper will be Chelsey Pruitt of Moss Point. Pruitt will also play midfield when not in net. The team boasts five players from coast region of the state.

Women’s soccer in the Mississippi Association of Community and Junior Colleges (MACJC) has been ruled by the South Division over the last decade. A South Division team has won the MACJC State Championship for nine consecutive seasons. Strother knows his ladies will face top flight competition every time they lace up their spikes.

“We’re young, but the girls had a great preseason, they worked hard, stayed mostly injury free, and are ready to go out and compete for 90 minutes every match,” said Strother.

The Lady Wolves open their season today when they host the Northwest Lady Rangers. The match begins at 4 p.m. at the Co-Lin Soccer Field in Wesson. Admission is free.