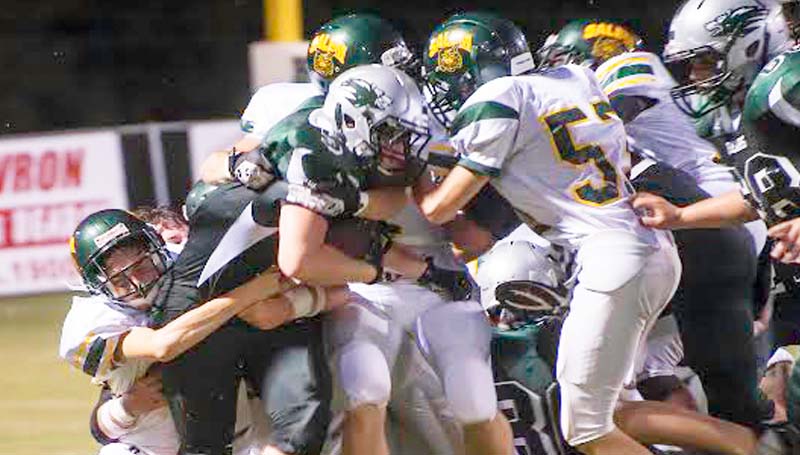 The first quarter saw the Wildcats on the first possession break through the Bears defense and score 6 points, but they could not convert the PAT. Salem pinned the Bears deep on the kickoff and after a penalty against West Lincoln, the Wildcats tackled the Bears in the end zone for a safety to take an 8-0 led.

Salem continued to hold the Bears offense scoreless during the first quarter and scored an additional touchdown with 21 seconds left and a PAT prior to the end of the quarter.

Salem continued their offensive momentum into the second quarter with a talented group of running backs. West Lincoln struggled to get their offense moving against the Wildcat defense.

Roger Nicks ran for a 6-yard touchdown and a successful PAT putting the Wildcats up 22-0. Salem, plagued by penalties all night, was called for an unsportsmanlike conduct penalty that put them in 4th and 21. Salem still converted for a touchdown on a run by Shannon Damond to advance the score 28-0.

West Lincoln entered Salem territory after a roughing the passer penalty prior to an interception, which was returned to the West Lincoln 10-yard line. A touchdown on the next play putting the Wildcats up 35-0.

Jade Use returned the kick-off 7 yards followed by a Wildcat penalty, which put the Bears in Salem territory before a fumble and recovery by the Wildcats. Salem charged down the field scoring their last touchdown on a 22-yard run and extra-point of the first half making the score 42-0.

West Lincoln came out after the halftime redirection from the coaching staff and held the Wildcats scoreless in the third quarter. West Lincoln’s Jade Use, Matthew Allred and Ty Forman fought offensively to get the ball on Salem’s 6-yard line. On a third and goal the Bears got on the scoreboard on a pass by senior quarterback Ty Forman to junior wide receiver Jayden Rushing.

An onside kick by West Lincoln was unsuccessful. West Lincoln defense stunned Salem on a tackle by Lofton Sills 11 yards in the backfield pinning the Wildcats to 4th and 17 and unable to convert on downs.

West Lincoln continued to pound away at the Wildcat defense and came up with a huge fourth down conversion on a 44 yard pass by Ty Forman to Jade Use. The run into the end zone narrowed the score to 42-13, followed by a successful PAT by Bryce Temple. The third quarter ended with a score 42-14.

Salem responded early in the fourth quarter on a 44-yard touchdown by Terry Coleman and a 2-point conversion for the final Wildcats’ points of the night going up 50-14.

Jade Use returned the kickoff 50 yards to put the Bears deep into the Wildcat territory. After a 7-yard run by Kodie Carroll, Jade Use sprinted for a 17-yard touchdown run followed by a successful PAT to score the final points of the night 50-21.