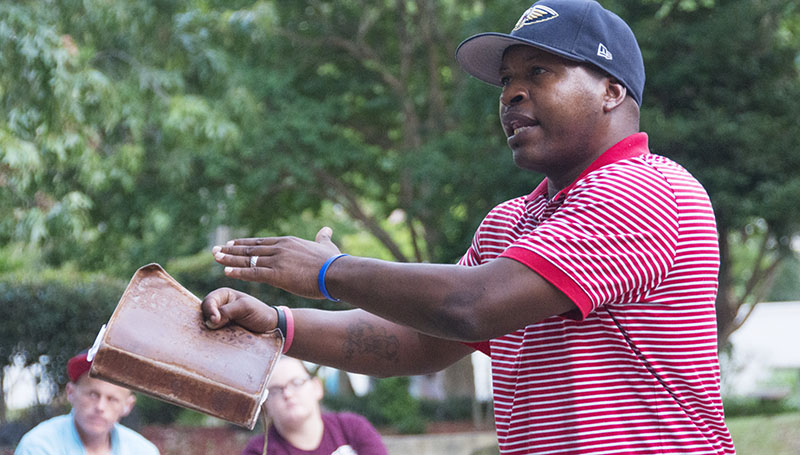 DAILY LEADER / KATIE WILLIAMSON / Pastor Troy Gause, with Church Without Walls in New Orleans preaches at City Park to a group of the homeless in downtown Jackson last Saturday, Aug. 23. He tells the story of David and how everyone, like David, can be chosen by God to become a queen or king, even if society has cast them aside.

Tim lived in Lincoln County for most of his childhood. He went to Bogue Chitto Schools until ninth grade when he decided to leave and join the workforce. He later got his GED.

“I started to find work in Brookhaven, but I couldn’t find any so I went to Louisiana and started working on tug boats,” said Tim. “Then I worked for a pallet company.”

Tim continued to bounce around the south, picking up manual labor jobs such as electrical work on a cruise ship and laying concrete floors. Nothing was permanent and none of the jobs offered Timothy any kind of stability.

A few years ago, doctors found a cancerous tumor in Timothy. He went through operations and has been in remission since. Unfortunately, it left him unable to work the same types of backbreaking jobs he had done before.

“I was missing work because I didn’t have the energy to go in. I was too weak,” said Tim.

His friends said that this is around the time that Tim turned to alcohol. Timothy said that he drank to dampen the pain. After the surgery, he was laid off and has remained that way for the past year. 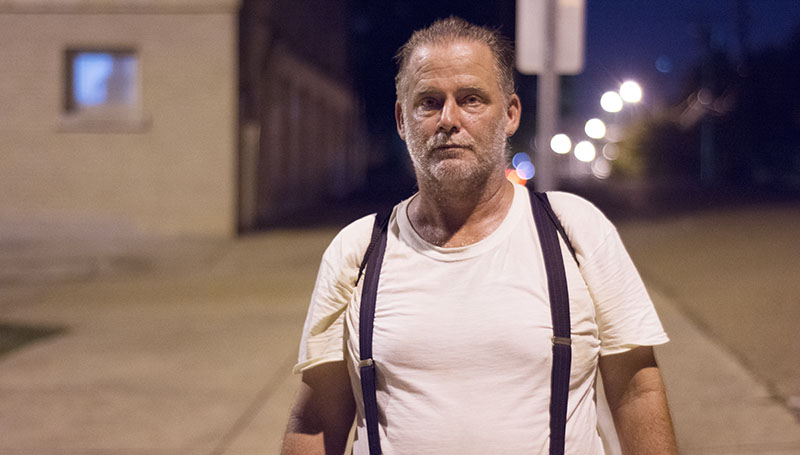 DAILY LEADER / KATIE WILLIAMSON / Lincoln County native Tim spends his time wandering the streets of downtown Jackson between finding a place to sleep at night, catching some air-conditioning at the library or lining up at the soup kitchen.

Tim is just one of the faces that have found a home at Smith Park in Jackson. The benches and pavilion are littered with shabbily dressed men and women from all over Mississippi who have been pulled into the slums of society. Few of them see hope for the future and most of them have turned to drugs to ease the pain and sadness of their lack of a home, or in Timothy’s case a family. They have fallen into the pit of a jobless downtown Jackson.

“It is a slow death,” said Jim Williamson, founder of Jackson’s Church Without Walls. “As long as they stay in downtown Jackson, it becomes a vicious circle they can’t escape.”

Tim spends his days walking to one of Jackson’s soup kitchens and sitting in the library air-conditioning. At night he finds abandoned houses to sleep in. He said he is just waiting for that next job to come. He’s got nothing other than the clothes on his back.

“I don’t know how much more I can take,” said Tim.

In a 2013 report released by the U.S. Department of Housing and Urban Planning, there are 1,935 homeless households in Mississippi. Among them, 1,636 have no children, 192 have at least one child and one adult and 107 households are only children. A total of 1,158 of the households are unsheltered. In total, there are 2,403 homeless Mississippians.

The report continues to describe the population: 475 of the homeless are chronically homeless, 230 are severely mentally ill, 498 have chronic substance abuse, 210 are veterans, 47 have HIV/AIDS and 216 of them are victims of domestic violence.

The Mississippi United to End Homelessness organization takes surveys every two years to show how many homeless people are in the state at any given night. It is called a Point-In-Time Count. The counts fluctuate year to year and even day-to-day, but it shows at that point in time how many sheltered and unsheltered are living in Mississippi.

There are many organizations working locally and statewide to lower the numbers. Everything from the AFJC Community Action Agency Inc.,  Brookhaven Outreach Ministries and local food pantries to Mississippi United to End Homelessness and The Mississippi Department of Education.

Tim has found some help through The Church Without Walls (CWOW). The ministry was founded in New Orleans and connects churches with the homeless. Last winter the group began a new ministry in Jackson that is hosted by churches in Crystal Springs.

“We rode down to Smith Park with two 24 packs of Crystal hamburgers during the winter time on a Thursday. We prayed and walked into the park in the middle of the night and there were six guys sitting at the gazebo. We went out, fed them hamburgers and asked them what night would be best for them to have church down there and that’s how it started,” said Williamson. “We bring the gospel to the homeless, outcasts and drug addicts.”

Every Saturday night, Williamson loads a van of people from Crystal Springs and drives to the heart of Jackson where they hold services. They preach and serve food to the homeless who reside in Smith Park.

“All of these people are disconnected from church. They felt like they didn’t fit in a normal church setting,” said Williamson. “CWOW seemed to attract people like that. We are a bridge between the homeless people, the outcasts, the drug addicts and the normal church.”

After their services, CWOW members speak with the park residents about getting out of their situations. They connect men and women who are sincere about making changes in their life with the Christian rehabilitation center, Bethel Colony, in New Orleans.

The Christian-based colony serves over 150 men and women. Their mission is to rehabilitate the less fortunate. They give them food, clothes, shelter, job training and education.

“Tim showed up to CWOW about four months ago. He is a very good-hearted guy. I’ve seen Timothy help the other homeless people in the park as much or if not more than anyone I have ever been associated with,” said Williamson. “Timothy is one of the last ones to leave the park every night. I can see God is working on Tim and I would venture to say that within the next couple months, he will be at Bethel.”

CWOW works strictly through donations and volunteers. Their biggest expenditure is food and gas. Williamson invites anyone to join the group in Smith Park, Saturdays at 6 p.m. For more information about CWOW Jackson, follow them on Facebook at www.facebook.com/cwowjackson .