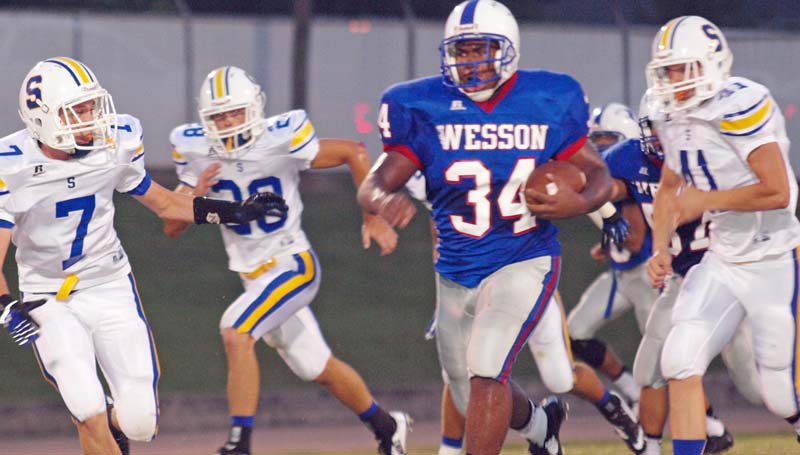 WESSON – The Wesson Cobras hosted the Sumrall Bobcats Friday night at H.L. Stone stadium in Wesson. The Cobras bounced back after a hard loss last week with a winning score of 27-26 over the Bobcats.

Wesson coach, Ronald Greer, commented after the game, “I am so proud of our kids for bouncing back after the debacle we had in Monticello last week. We have to keep improving each week to reach the goals our kids have set for this season. Our coaches did a great job of preparing our kids for this game. ”

The game began with the Cobras receiving and senior Dartavious Dixon ran a 95-yard kickoff return for a touchdown in the first seven seconds of the game. The Cobras defense managed to hold the Bobcats on a tight rein and scored again on their next possession when sophomore Jermaine James rushed 30 yards for a touchdown.

The Bobcats were able to slip past the Cobras’ defense with a completed pass to Carter McGuffee, which put Sumrall in the red zone. Sophomore Ali Coleman put the first points on the board for Sumrall bringing the score to 13-7.

The Cobras ended the first quarter with Enrique Smith rushing 18 yards for the touchdown putting the Cobras ahead with a comfortable lead of 20-7.

The Bobcats managed to gain some momentum in the second quarter with two big touchdowns by Carter McGuffee and Tyler Bunch. This tied the score to 20-20 at 4 minutes on the clock.

The Cobras would fight back to end the first half with a big play by senior Farrod Green who made a great catch in the end zone to help the Cobras reclaim the lead at 27-20 with eight seconds left in the second quarter.

The rest of the game was a defensive battle between the two teams with Sumrall making another touchdown closing the Cobra’s lead to 27-26.

With 32 seconds left in the game, the Cobras lost possession of the ball with a fake punt putting the Bobcat’s within striking distance of the end zone at the Cobras 48-yard line. Sumrall went for the pass play but junior Kendrick Brown intercepted the pass, which ended the game with a big Cobra win.

The Cobras will be on the road next Friday in Collinsville to take on the West Lauderdale Knights. Game time is 7 p.m.

MEADVILLE – DeMartre Collins wanted to make a big statement this season and Friday night he managed to deliver his... read more