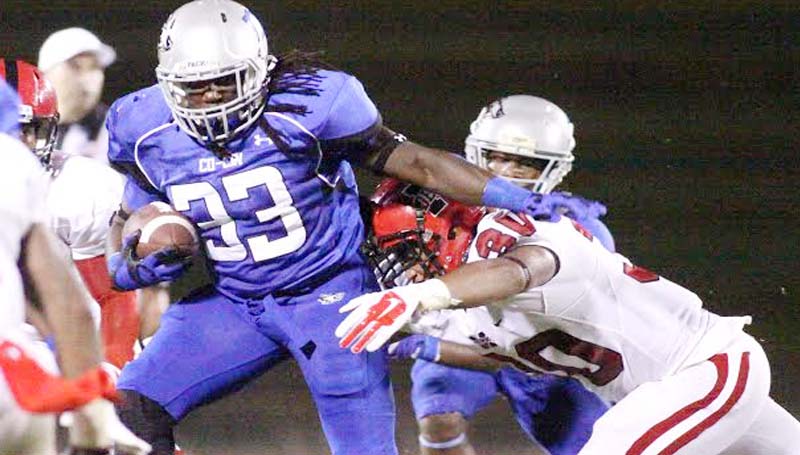 WESSON – A 94-yard touchdown return by Diquan Davis on the opening kickoff was the tone setter in No. 11 Copiah-Lincoln’s 50-0 victory over Mississippi Delta on Thursday night in Wesson.

Davis, a sophomore from Greenville, also added a 1-yard touchdown run in the second quarter. Davis put the Wolfpack (2-1) on the board just 16 seconds into the game as Co-Lin bounced back nicely after suffering their first defeat of the season last week.

Co-Lin would get another special teams score at the 3:35 mark of the first quarter when Dy-Celious Reese blocked a punt by Delta’s Cody Lloyd into the end zone. The ball was recovered by freshman linebacker Aaron Fairley for a touchdown.

Co-Lin wide receiver Donald Gray hauled in a 45-yard touchdown pass from Daniel Fitzwater at the 5:14 mark of the first quarter. The score was the fifth touchdown catch by Gray through three games. Fitzwater would also throw a 1-yard TD pass to Jalen Jackson. The Wolves led 43-0 at halftime.

Co-Lin would not allow Delta (1-1) to gain a first down until well into the second quarter. The Wolves never punted and due to the new MACJC mercy rule, the game clock never stopped running in the second half. Sophomore quarterback Zach Smith led the Co-Lin offense the entire second half and finished 2-for-4 for 21 yards.

Freshman kicker Greg Nickles finished 5-for-7 on PAT attempts and made a 23-yard field goal in the first quarter. Arthur Maulet recovered a fumble for Co-Lin and Joseph Este grabbed an interception.

The Co-Lin defense was relentless in their pursuit of Delta’s ball carriers. Delta posted 107 yards of total offense and was forced to punt eight times. The Trojans rushed for 4-yards in the first half and had a net rushing gain of zero for the game.

The Wolves will return to action next Thursday as they prepare to invade Summit to take on their archrivals, the Southwest Bears. Kickoff is at 7 p.m.