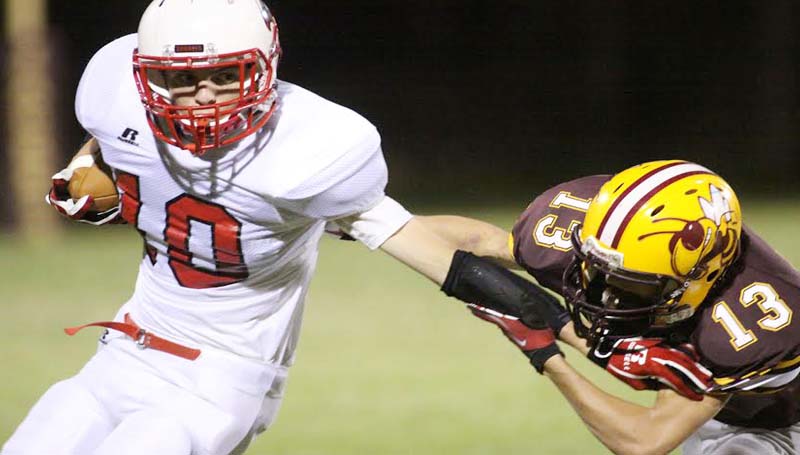 Senior running back Brett Calcote rushed for 195 yards on eight carries and scored two touchdowns as the Loyd Star Hornets overpowered the Enterprise Yellow Jackets to gain a 60-12 victory in the 2014 Sting Bowl and a big Region 7-2A win Friday night at Harry Cole Field.

Both teams enter into the contest starving for a victory, but the Hornets relied on their strong rushing attack to amass 475 total yards on the ground to spoil Enterprise’s hopes of ending their 35-game losing streak.

In the opening quarter, Enterprise and Loyd Star’s fans gathered to watch an exciting bout between two Lincoln County rivals. Both teams provided a great defensive battle as neither school would let the opposing offense score as the first quarter ended scoreless.

In the second quarter, the Hornets managed to break up the scoreless drought early when senior running back punched in a 6-yard run with 11:54 remaining. Loyd Star elected to go for the two-point conversion all night long and was successful on their first attempt as Anfernee Claire ran it in. Claire rushed in three more two-point conversions and Peyton Flowers cashed two 2-point conversions on the night.

After a quick three and out by Enterprise, the Hornets’ offense managed to find their rhythm and score another touchdown on Peyton Flowers 12-yard run with 7:51 left. 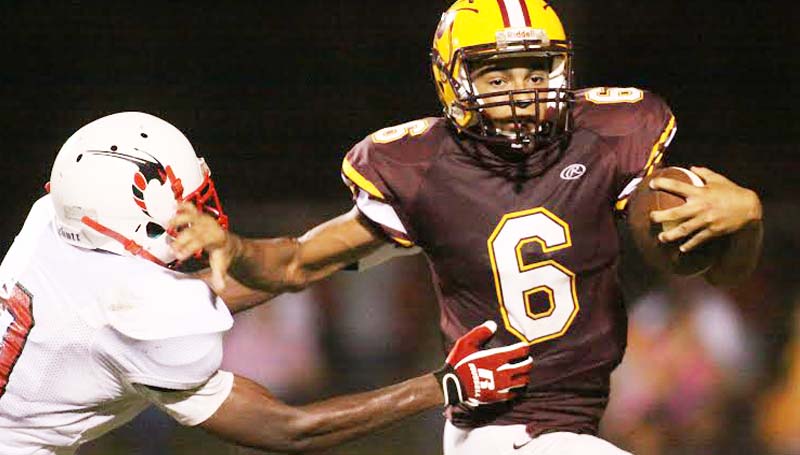 The Hornets would add another score late in the second quarter, when Calcote sprinted in a 22-yards touchdown run with 2:49 remaining.

Enterprise would make a great attempt to score on their final drive to close out the second quarter after recovering a muff punt inside the 20-yard line. The Jackets would run several plays to score but were unable to punch it in for a touchdown as the first half ended with the Hornets leading 24-0.

In the second half, the Hornets continued to pound the ground against Enterprise and add 22 more points to their score to command a 46-0 after three quarters of action.

Sophomore quarterback Parker Flowers would steal the show in the third quarter as he would scored all three of Loyd Star’s touchdowns on scoring runs of 5, 22 and 52 yards.

In the fourth quarter, Loyd Star would continued to increase their score as Calcote managed to break free to score a 96-yard touchdown against the Jacket’s defense with 8:50 left.

Enterprise finally managed to break-up Loyd Star’s bid of a shutout late in the fourth quarter, when Layne Brown caught a pass from Zach Hodges to score a 22-yard touchdown with 6:52 left. The Jackets elected to go for the two-point conversion but were unsuccessful on two attempts.

The Hornets quickly answered Enterprise’s score and put their final points of the contest on a 33-yard run by Zac Arnold with 6:30 remaining.

The Jackets refused to go down quietly would add another touchdown to their score to end the fourth quarter as Chance Lacking would break through Loyd Star’s defense to cash in an 80-yard touchdown run with 5:18.

Offensively, Arnold was the second leading rusher for the Hornets with 99 yards on nine carries. Parker Flowers would added 95 yards on eight carries to their ground attack, while completing five-of-11 passes for 32 yards.

Braxton Thompson paced Enterprise’ offense with 18 rushes for 140 yards. Lacking finished with seven carries for 70 yards. Hodges led the aerial attack for the Jackets completing two-of-12 passes for 78 yards. Brown was the top receiver with one catch for 65 yards.

The Jackets (0-5, 0-1) will enjoy their homecoming festivities next week as they welcome the Pisgah Dragons to Harry Cole Field Friday night.

The Hornets (2-3, 1-0) will be on the road next Friday as they prepare to visit Hattiesburg to take on the North Forrest Eagles. Both games kickoff at 7 p.m.