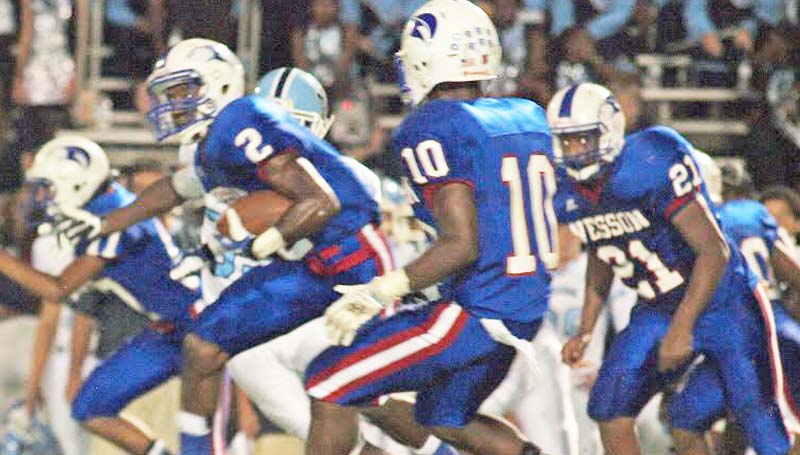 WESSON- The Cobras welcomed the North Pike Jaguars to Stone Stadium Friday night as Wesson was celebrating their 2014 Homecoming week. The Jaguars ended up spoiling the Cobras homecoming festivities with a 50-0 win in high school football action.

Even though Wesson 2014 Homecoming Queen Kayla Britt and her court reigned supreme during the festivities, the Cobras football team did not bring their ‘A’ game to compete against the tough Jaguar offense and defense.

“I am very disappointed for our players, coaches and fans that we didn’t have a better performance for our homecoming game,” said Wesson coach Ronald Greer, “Big plays and turnovers cost us.”

“Our offensive line was dominated by the North Pike defense,” continued Greer. “We never got anything established on offense the entire game. Defensively, we had problems in the secondary with our guys not executing the coverage that was called. Football is a team game and all 11 players have to execute. We have a lot of young men that are giving great effort and deserve the same from every teammate. Now, we must regroup and prepare for a very good Salem team.”

North Pike controlled the game with a total of seven touchdowns and one safety. Jaguars’ kicker Cade Jenkins finished the night with six-of-seven on the extra point kicks. Top offensive players for the Jaguars were Ladarius Dunn with three touchdowns and Colton Magee with two touchdowns. North Pike’s offensive stats include 21 rushes for 123 yards that included one touchdown. Passing was 11 of 17 with a total yardage of 223 with four touchdowns.

Wesson’s offensive team struggled against the Jaguars finishing with only 27 rushes for 28 yards. Quarterback Tyler Christmas completed three of seven passes for 27 yards.

Defensively for the Cobras was Jermaine James lead the team with five tackles. Tyler McLeod, Arthur Harris, and JaMarcus Patterson had four tackles each. Timothy Craft had a fumble recovery.

The Wesson Cobras travel to Walthall County next Friday night to meet the Salem Wildcats. Kickoff is at 7 p.m.