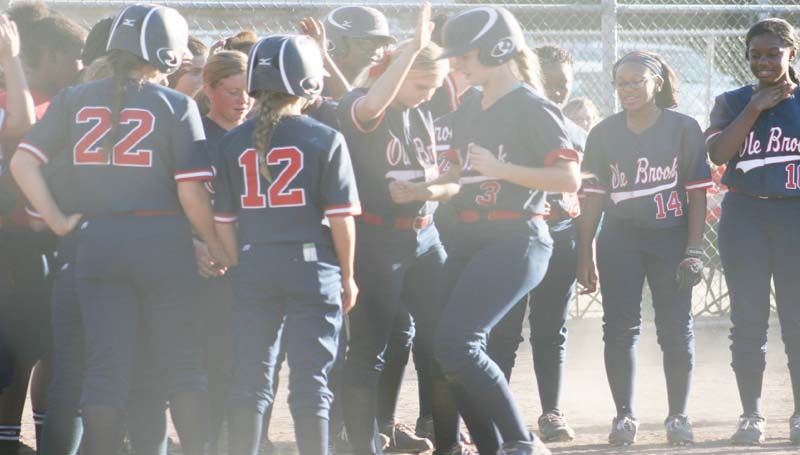 DAILY LEADER / MARTY ALBRIGHT / Brookhaven’s Katherine Shell (3) is greeted at home plate by her teammates after hitting her second three-run home run on the evening against Provine Tuesday.

The Brookhaven Lady Panthers continues to be a force in Region 6A/5A slowpitch softball action as they clobbered the Provine Lady Rams in a varsity double header Tuesday afternoon at the Lady Panthers Softball complex.

“We hit the ball really well in the first game,” said BHS first year head coach Mandy Vinson. “Our defense played great in both games. Katherine Shell had a very good night for us at the plate.”

Brookhaven (7-9, 4-0) will return to action Thursday as they prepare to host the Wingfield Lady Falcons for another big varsity doubleheader, starting at 5 p.m.

The Lady Panthers came out strong and quickly overpowered the Lady Rams in the first inning as Brookhaven secured a 12-0 and continued their offensive onslaught in the second inning by scoring six more runs to secure the victory in a three-inning contest.

Rileigh Allen was the winning pitcher for Ole Brook with two strikeouts and no walks.

Keyondria Jones took the loss for Provine with no strikeouts and five walks.

In the Game Two, Ole Brook continued to overpower Provine as they quickly took care of business in another three-inning contest. The Lady Panthers scored five runs in the first inning and exploded with 10-runs in the bottom of the second inning.

Allen tossed the win on the mound for Brookhaven collecting four strikeouts and did not give up a walk.

Jones suffered the loss again for the Lady Rams with no strikeouts and three walks.