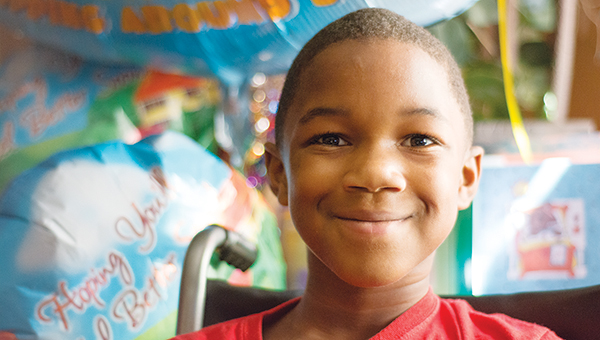 DAILY LEADER / KATIE WILLIAMSON / Little Panther Lee Henderson is in good spirits Wednesday in spite of being in a wheelchair.

It was all smiles at the Hendersons’ home Wednesday. Nine-year-old Lee Henderson was home from the hospital surrounded by get well soon balloons and gifts. His mother, Shanta Henderson, and aunt, Kawandra Lopez, were happy that Lee was home safe, and Lee was happy to be getting so much attention.

“Well, this is still new to our brave little panther, he is still in a lot of pain,” said Henderson. “Some days are better than others.”

Lee smiled and said even though he wants to go play with his cousin outside, he likes that people are doing things for and giving him lots of attention while he is in the wheelchair.

“He’s been coping in his own way,” said Shanta. “We’ve just been dealing with it. I never knew someone in a wheelchair could be so active.”

She added that some days Lee is happy and energetic and others he is in pain and just wants to watch TV.

Last Tuesday, Lee was injured in a hit and run car accident. His leg was broken in two places from the collision resulting in two surgeries at Blair E. Batson Children’s Hospital in Jackson. A metal plate with screws was inserted into his leg.

Shanta said Lee will be in a wheel chair for the next six weeks and will be in a cast for 90 days. He will be going back to the children’s hospital Oct. 16 to find out if he will need any additional surgeries.

The support from the community is evident from the number of signatures sprawled across his little cast.

“We are grateful to have people in our lives to help and see him through this,” said Shanta. “We would like to thank our family, Mamie Martin, Brookhaven Superintendent Ben Cox, Suzanne Britt, our church family at St. James Missionary Baptist Church and all our Ole Brook community for coming together to support and pray for Lee.”

Lee added a big thank you to his grandparents (Herman and Jeanette Henderson), his aunt (Kawandra Lopez) and his cousins (Ken Boyd and Thalia Lopez) for helping his mother and being there for him.

Henderson said she would be taking Lee to the next Ole Brook home football game Oct. 3 against Wayne County. Lee is a huge football fan and loves to root for his cousins on the team. He has already decided his next cast will be blue and red, and he wants all the Panthers to sign it. Lee also said he wants to play football when he grows up.

Kawandra said she is worried that if he has to have another surgery, then Lee may never be able to play football.

Meaning, because of a hit and run at the age of nine, little Lee may never be able to play like his older cousin when he is 17 or 18.

Brookhaven Police Chief Bobby Bell said he has had a couple tips, but nothing has come of them. He said the case is still under investigation and right now they have no leads. The only information known is that it was a white car that hit Lee.

“If anyone knows anything please come forword,” said Shanta. “We want justice. They could have stopped to see if he was okay, but they didn’t. They just left him there.”

She added people have told her they are keeping an eye out for any information.