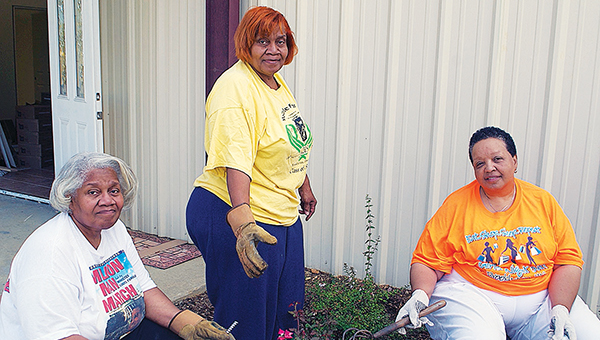 Kynett United Methodist Church’s nearly rebuilt sanctuary was buzzing with activity on Thursday. Electricians perched on ladders amid massive rolls of carpet and dozens of boxes of tile waiting to be installed while church members and hired helpers buzzed all throughout the structure to finish jobs big and small before Sunday, when the church will open the doors of the new worship center with a host of special guests to help celebrate.

Despite the substantial number of construction tasks still to be checked off, Rev. Carolyn Webster was confident the sanctuary would be ready for a consecration ceremony at 10:30 a.m. Sunday. Bishop James E. Swanson Sr. will lead the ceremony to sanctify the building.

“We have it planned down to the last screw,” said Webster. “Even though it looks like it’s not possible now, come back Saturday, and you will see. It will all get done.”

For five years, the congregation of the church on Second Street held services in the fellowship hall after Kynett’s main building was destroyed due to a termite infestation in 2009, said Webster.

Webster, who became pastor of the church in July of last year, said the destruction of the previous sanctuary took a toll on the church membership.

“When the building was torn down, some of the members may have lost their church identity,” she said.

Over the last year, Webster said the average service attendance number was in the teens. But, she is confident the return of the sanctuary will allow more outreach into the community and lead to church growth. She also praised the efforts of the faithful church members who hung in through the tough times.

“At times things seemed like they were crumbling around us, but then everything came back together,” said Webster.

Last Sunday, the stalwart members wrote scriptures on the floor of the chancel (elevated platform normally reserved for clergy and choir) before the carpet was installed there this week.

“Now, everyone who stands up there is (literally) standing on the word of God,” said Webster.

“Those two are normally the cooks,” said Bryant of her two co-workers, “but lately they have been the manpower.”

The women said they have painted, moved furniture and pitched in wherever they could.

“We found some muscles we didn’t know we had,” said Banks.

“It’s been phenomenal, the support that has come,” she said.

Michael McNair, who teaches Sunday School at Kynett, said the church had great potential to grow.

“It’s going to take teamwork,” he said, as well as networking with other churches and sharing ideas with each other and the community.

McNair said a food pantry, counseling center or group meetings were other possibilities.

“It’s really about what is needed in the community,” he said.

DAILY LEADER / KATIE WILLIAMSON / Little Panther Lee Henderson is in good spirits Wednesday in spite of being in... read more