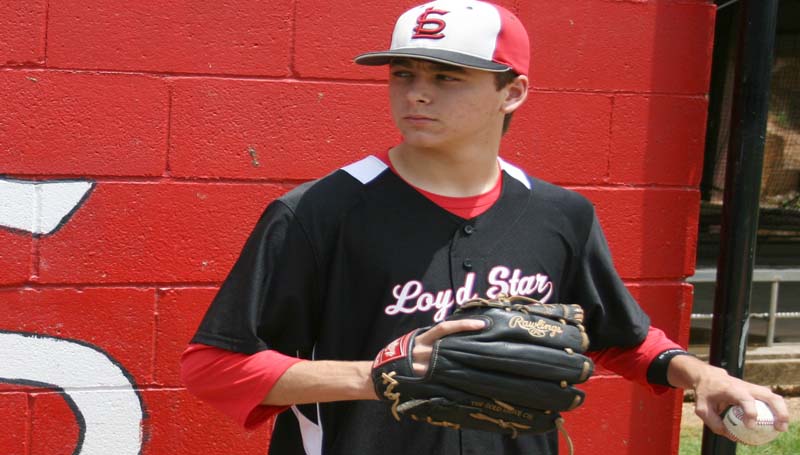 Caleb Yarborough’s amazing pitching and hitting performances helped the Loyd Star Hornets baseball team experience a magical season as they roared through the regular season to clinch the Region 7-2A crown.

In the playoffs, the Hornets continued their hot winning streak to eliminate the Lake Hornets, the Pisgah Dragons and the Richton Rebels before falling to the Taylorsville Tartars in the MHSAA Class 2A South State Championship.

Yarborough’s great accomplishments at the plate, on the mound and in the outfield received big reviews from college coaches. In early January, Yarborough signed an athletic scholarship to play baseball for the Meridian Community College Eagles.

For all of his achievements, Yarborough was named The DAILY LEADER’s Most Valuable Player and Mr. Baseball on the 2015 All-Area Team.

The DAILY LEADER’s All-Area Dream Team is composed of players around the area. It was selected by the DAILY LEADER’s sports staff, with input provided by high school, referees and college coaches.

Yarborough shared his thoughts on being selected as The DAILY LEADER’s Most Valuable Player: “I am very excited to be named the All-Area MVP and I thank God for all the blessings he has given me this season,” he said.

Joining Yarborough on the pitching mound is Mack Smith of Wesson, Levi Redd of Loyd Star and Landon Gartman of Enterprise.

Receiving honors at the catcher position is Blaine Moak of Brookhaven, Benard Selmon of Franklin County and Hunter Richardson of Enterprise.

In the outfield are Brett Calcote of Loyd Star, Alex Neal of West Lincoln, Gabriel Lewis of Lawrence County, Steven Ginn of Bogue Chitto and Penn Wilson of Brookhaven.

Caleb Yarborough,  was the Hornets’ ace on the mound. He compiled a 9-1 record this season and had a 0.48 ERA, striking out 99 batters and allowing only 16 walks in 58 innings pitched. Yarborough finished his high school stint with a total of 299 strikeouts.

As an outfielder, Yarborough batted .429, hit two homers and drove in 40 runs for Coach Jared Britt.

On defense, Yarborough posted a .917 fielding percentage against opposing teams.

Yarborough shared his thoughts on the season and on coach Jared Britt: “We had an awesome season and I enjoyed every bit of it. I am proud to call my team my family.

“Coach Britt is a great coach and a great influence on all the players,” said Yarborough.

Yarborough is ready to begin a new chapter in his baseball career as he plans to attend Meridian Community College to play for the Eagles. He stated that he wants to pursue a career in physical education to be a baseball coach.

“Caleb is the kind of kid that every coach dreams of coaching,” said Britt. “Not only does he perform well on the field, but he also does well in the classroom.

Mack Smith, a senior, was the team leader on the mound as he posted a 9-2 record with 1.12 ERA. Smith had 79 strikeouts and 10 walks on the season.

Levi Redd, a junior, played a huge role in Loyd Star’s amazing run. Redd compiled a 6-2 record on the season. His precise pitching earned him a 1.71 ERA, striking out 49 batters and allowed 14 walks.

Landon Gartman,  an eighth grader, compiled a 5-1 record for Enterprise. He had a 1.51 ERA, striking out 70 batters and allowed only 27 walks.

Blaine Moak,  a junior, earned a .328 batting average for the Brookhaven Panthers.

Benard Selmon,  a senior, paced the Franklin County Bulldogs with a .333 batting average.

Alex Smith,  a senior, posted a .327 batting average for the Brookhaven Academy Cougars.

Scotty Bateman,  a senior, provided great leadership on and off the field for Brookhaven Panthers. Bateman batted .350 on the season.

Bradyn Brister,  a sophomore, stepped up his performance in Loyd Star’s run through the playoffs as he compiled a .310 average for the Hornets.

Bryce Temple, a senior, had a productive year for West Lincoln Bears. He had a .500 batting average.

Tyler McLeod,  a senior, helped the Wesson Cobras advance to the MHSAA Class 3A quarterfinals as he batted a .481 on the season.

Brett Calcote,  a senior, provided leadership for the Loyd Star Hornets. He batted .400 on the season.

Alex Neal,  a senior, was a force in the outfield. He earned a .456 batting average for West Lincoln.

Gabriel Lewis, a junior, batted .471 for the LCHS Cougars.

Steven Ginn, a senior, posted a .405 batting average for the Bogue Chitto Bobcats.

Penn Wilson, a junior, batted .351 for the Brookhaven Panthers.

Heath Hickman,  a senior, was one of the leaders on the BA Cougars as he batted .333 on the season.

Bo Smithers,  a senior, posted a .397 batting average for the Bobcats.

Mac McQuage, a senior, earned a .355 average at the plate for the Wesson Cobras.

DeMartre Collins, a junior, had a productive season for the Bulldogs. He batted .358.

Max Daughdrill,  a junior, played a big role in Wesson’s season with a .400 average.

Zach Dickerson,  a senior, earned a .308 average at the plate for Brookhaven Academy.

Nick Parker,  a senior, had a productive season for the Bobcats as he batted .384.

Kody Smith,  a senior, provided leadership guidance for the LCHS Cougars as he helped lead the team with a .471 batting average.