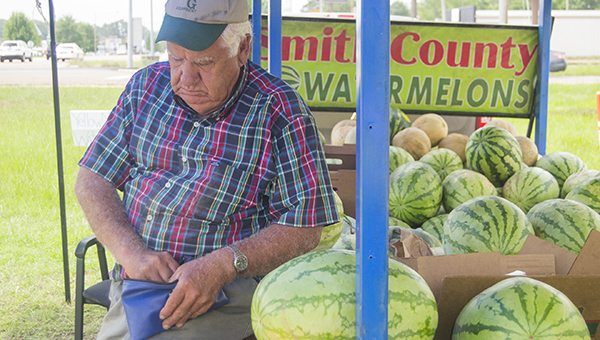 Nathaniel Weathersby / Darrell Wilson deposits the results of another sale at his watermelon stand at the intersection of US Highway 51 and Union Church Road. Wilson sells yellow and red watermelons from a farm in Smith County. He also sells cantaloupes, tomatoes and other fruit.

It is hard to drive very far in Lincoln County without seeing a white sign with “Smith County Watermelons” in red in front of a trailer full of the elongated green fruits. Although one would think the market would be oversaturated, it seems like business is really booming.

Darrell Smith sells watermelons part-time at the intersection of Highway 51 and Union Church Road and has been doing so on and off for many years.  He said he used to sell watermelons on the lot that is now the home of the Bank of Franklin with his grandchildren.

“We sold some kind of melon,” Smith said about the location’s ability to attract customers.

Smith is a Brookhaven resident who gets his watermelons from Smith County, which has a legacy of providing a smaller but sweeter melon.

A regular customer of Smith’s, Mike VanBuran lives in Madison and when he travels to Brookhaven for his job up to twice a week he purchases a watermelon for his granddaughters.

“When I find something good that works, for me I stick to it,” VanBuran said. “I get one from him every week.”

VanBuran said that he introduced his granddaughters, ages 6 and 8, to yellow meat watermelons last year, and “they just fell in love with them.” Ever since then when he comes to Brookhaven on his mission to fix gas pumps in the city he purchases them a watermelon.

“My motto is to treat people equally,” Smith said explaining how he grades the watermelons so that he can sell them at different price levels.

At the end of the day, usually around 6 p.m., Smith said he donates about three melons to the nursing homes around town.

Just past the Airport Pik & Pak & Mini Storage at the intersection of Old Highway 51 North and Industrial Park Road, Gene James and Morris Gibbons have been selling watermelons for about 12 years.

James said they used to get their watermelons from Florida, but when Smith County watermelons are ripe they jump on the opportunities.

Gibbons and James both say that a big part of what they like about selling watermelons is meeting people and talking to them.

He said that they sell both yellow and red meat watermelons, cantaloupes, tomatoes, okra and squash — all local.