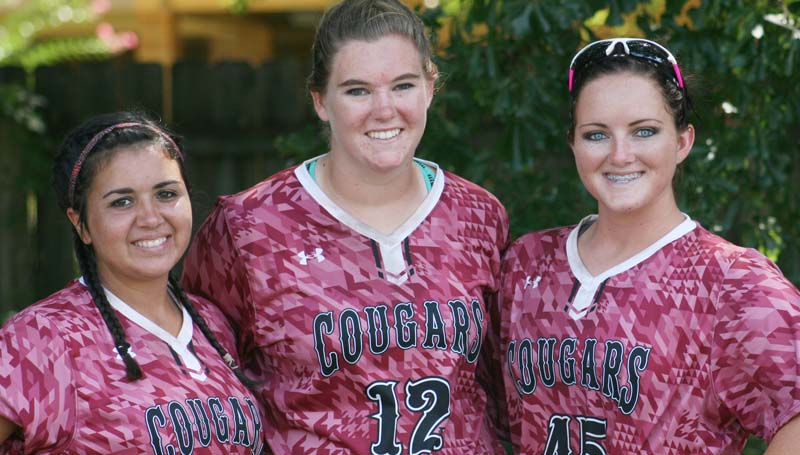 DAILY LEADER / Marty Albright / Lawrence County softball seniors (from left) Barri Rogers, Jordan Harp and Emalee Gaffney are excited to get the 2015 slowpitch season to get under way. LCHS Lady Cougars will be in action Aug. 15 at Puckett.

Competitiveness, passion and hard work will be the team strengths as the Lawrence County Lady Cougars kick off their season in slowpitch softball, which began Saturday when they hosted a Fall Classic Jamboree tournament.

The Lady Cougars will participate in another Fall Classic Scrimmage next Saturday as they travel to Puckett to play in their tournament.

“This season will be a true test to see what our players are made of,” said LCHS coach Meleah Howard. “We will have seven starters on the field this year, so it will be interesting to see who will step up. I really enjoy coaching this group of girls because they all have passion for the game and they love to win.”

Howard will be starting her fourth season at the helm. The Lady Cougars look to improve on last season’s 20-6 record. Lawrence County posted a 3-1 record in district action.

The Cougars have three seniors – Barri Rogers, Jordan Harp and Emalee Gaffney – who will be looked upon to provide leadership on and off the field.

Callie Fortenberry is among the leaders returning with a .375 batting average in 2014. Barri Rogers had a 2.96 ERA with 30 strikeouts, and Maddux Kirkland batted a .300.

The Lady Cougars’ first regular season home game will be against the Brookhaven Lady Panthers on Aug. 18. The junior varsity game will precede the varsity game.

CO-LIN MEDIA / Cliff Furr / The Copiah-Lincoln offense works on installing their offense under the watch of head coach... read more