‘Field of Dreams’ one step closer to completion 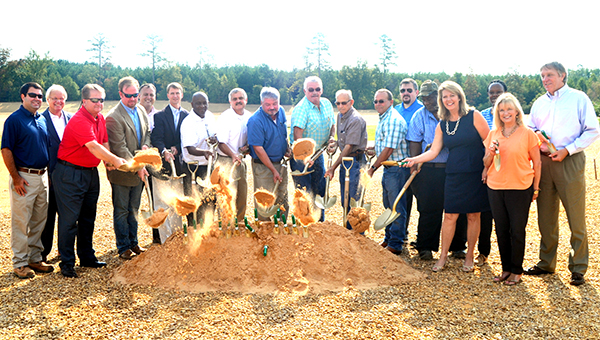 After six long years, the Lincoln County baseball complex is set to move into the final phase Monday.

County and city officials gathered Friday morning for the ceremonial groundbreaking. Culbertson Contractors, the company awarded the $2.3 million bid in July, plans to have start irrigation work Monday to jumpstart a process many expect to be fast.

Despite the fast pace of the next six months, the process leading up to it has been anything but quick.

Kimble said several years ago the commission began looking into what they could do with the empty parcel of land they owned. The baseball complex idea consistently kept surfacing.

“A few years ago, this idea got thrown around,” McNair Smith, District 1 commissioner, said. “I got really, really excited for the youth in Lincoln County.”

Smith said from the beginning, he has seen it as a way to bring the community together and begin mending some fences.

“It’s not about wins or losses or making it to the World Series; it is about a better community in Lincoln County,” he said.

After the idea sunk in, the commission decided to recruit a group of volunteers to perform a baseball feasibility study.

“They looked at baseball in Lincoln County — where it’s at and where it’s going,” he said. “These guys went to the nth degree.”

Ultimately they decided that not only was there a need in the community but that it would certainly be suitable for such a facility.

Dustin Walker, who served on the feasibility committee, said part of the study included looking at the current facilities the local league was using.

The board evaluated the economic impact. He said studies show that each player and coach brings an average of 2.5 travelers with them. If 12 people are on the team and there are 50 teams, around 1,500 visitors, not including the players and coaches themselves. These people will buy gas and food in Brookhaven, stay in area hotels and shop in area stores.

Walker said they believe the complex will help bring the community together.

“I don’t believe any community supports our children as much as Brookhaven and Lincoln County do,” he said.

Once the advisory board made their recommendation, the commission decided to present the idea to the Lincoln County Board of Supervisors. The supervisors ultimately agreed to fund the $2.5 million project.

Kimble said at that point, they brought in Ryan Holmes and Dungan Engineering to begin developing the plans for the complex.

“I’ve been in more meetings in the past year regarding this project than I have in the last 10 years with everything else I’ve done,” Kimble said.

Although many have shown excitement over the project, there have been dissenters over the last year and a half since efforts changed from hypothetical to reality. Some felt that county taxpayers shouldn’t be forced to the pay for the project. Others have questioned whether the new baseball field would create an economic divide.

“There was some heat, but we were willing to take it,” Smith said.

One thing the commission has done to ensure the complex will be for all children is to develop a foundation, which is currently chaired by Bill Sones.

“The Lincoln Civic Center Foundation will provide monetary and volunteer support — not just for baseball but for all activities,” Sones said. “But my personal interest is to help, monetarily, the kids who can’t afford to play. That’s my real passion.”

Sones, who has helped individually and through Bank of Brookhaven, said many people have been helping over the years, but the foundation will pool those resources together.

“It takes a village to do all these things,” he said.

Smith said once the facility is opened, their goal is to make sure everyone feels welcomed and has the opportunity to play the game of baseball.

“We can find a way to bring the community together,” he said. “When that happens everybody wins.”

JA: Get ready to peel and eat: Tickets on sale now for annual fundraiser