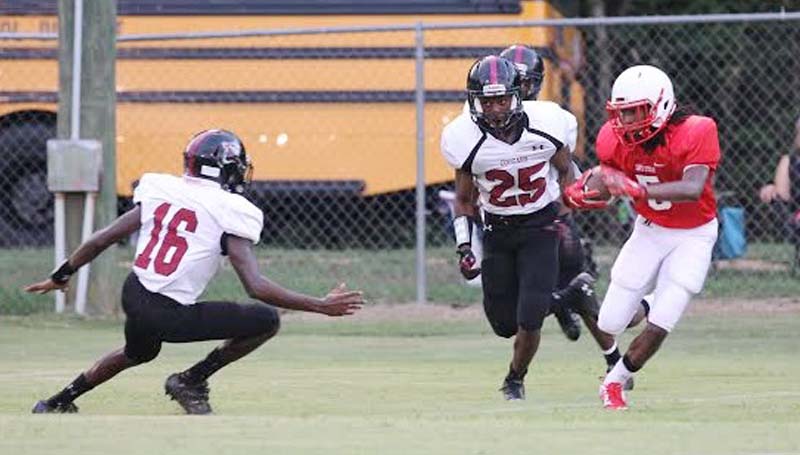 The official start of the 2015 high school football season is still a few days away, but Loyd Star and Lawrence County got things off to an unofficial start on Friday, as the Hornets hosted the Cougars in a three-quarter “jamboree” scrimmage.

The jamboree served as a “Meet the Hornets” night, as football players, band members, cheerleaders and other participants in fall extra-curricular activities were introduced to a large Loyd Star crowd.

As for football itself, Lawrence County edged Loyd Star 22-6 in a two-quarter varsity scrimmage. In one period of junior varsity play, the Cougars edged the Hornets by a 6-0 margin.

“It was just a glorified practice for both teams,” said second-year Lawrence County coach Jaymie Palmer. “Both teams used a lot of players, showed a lot of looks, and I think both teams came out of it pretty healthy. We had a great time and appreciate the invitation from Coach Cook and his staff.”

Loyd Star’s score came on a 40-yard touchdown pass from Parker Flowers to James Beard. Flowers gave it a Herculean effort. He completed four of eight passes for 83 yards, despite heavy pressure from LCHS rushers. Flowers totaled a negative 18 yards on 10 rushing attempts, but those numbers don’t tell the real story. Flowers broke free from several tackles to score an apparent 20-yard touchdown run to only to have it called back by a holding penalty.

“Their quarterback is a handful,” said Palmer. “He threw the ball really well, and our defensive ends did a poor job of containing him.”

Lawrence County’s final varsity tally came on a 3-yard run by Quitten Brown. Brown and Tevin Walker each rushed for 41 yards for the Cougars. Quarterback Charl’Tez Nunnery completed four of nine passes for 40 yards, but he threw the football much better than that. Nunnery was victimized by numerous dropped passes.

Adam Cook’s Hornets were led by fullback Anfernee Claire, who ran for 57 yards on seven carries. Conner Allen and Shay Hodges each had big pass receptions for Loyd Star.

In a brief junior varsity scrimmage, Lawrence County scored on its only offensive play, a 70-yard run by Jerome Dudley. Loyd Star held the ball for the remainder of the quarter, which was played with a running clock.

“It’s good that we scored,” said the LCHS mentor, “but it’s bad that our junior varsity offense got just one play. We don’t have much film to grade on those guys.”