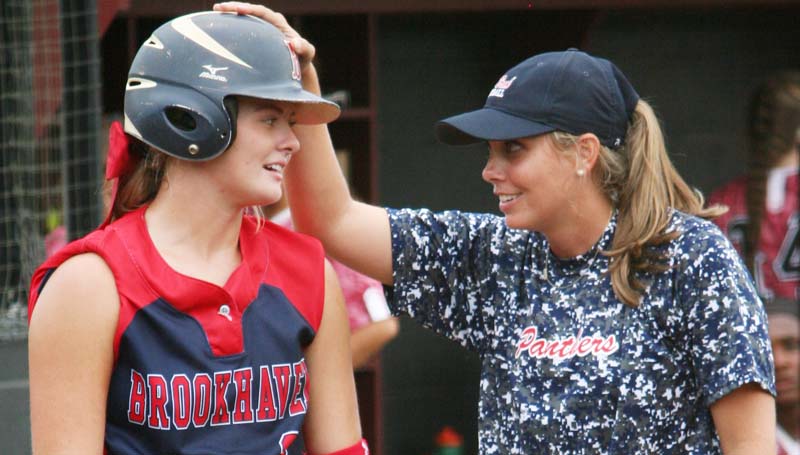 MONTICELLO – The Brookhaven Lady Panthers varsity softball team was engaged in a contest that can only be described as “nail-biting” against their eastern rivals, the Lawrence County Lady Cougars, Tuesday night in slowpitch softball action as BHS managed to escaped Monticello with a 4-2 victory over the Lady Cougars.

BHS Head Coach Mandy Vinson said, “We played really good defense tonight, but we have to get key hits to go along with the defense. Overall, tonight was a good team effort.”

In the first inning, Brookhaven was the first to post a run on the scoreboard, when Fallon Brooks knocked a run in to score the first of her two RBIs for the night.

The Lady Panthers maintain the 1-0 lead, until the bottom of the third inning when Lawrence County scored a run to tie the game.

Brookhaven responded during the top of the fourth inning by driving in three more runs to solidify the lead they would hold on to.

The Lady Cougars managed to keep the contest close by scoring their second run of the evening in the bottom of the fourth inning.

“I was very impressed with Brookhaven. They hit the ball well,” said Lawrence County Head Coach Meleah Howard. “I was not unimpressed with our team because we are a very young team. We had to replace seven starters from last year, but I think we held our own.”

The Lady Panthers were led by Jada Henderson who provided two doubles and a single. Fallon Brooks served up a double and a single, providing 2 RBIs for the night. Rileigh Allen offered two singles. Tia Bussey, Katherine Shell and Kat Wallace all hit safely, while Cheyenne Motley also hit a single and provided a third RBI. Macy Ziskin, who hit into a fielder’s choice, provided the fourth RBI. Shell got on base with a walk, also, and crossed home plate twice for two of the runs scored.

Allen was the winning pitcher for BHS.

In junior varsity action,  Lawrence County pulled out a 11-2 win over Brookhaven.

Prior to varsity game, the junior varsity teams played their game. A fine, misty rain fell at the beginning of the game only to move out of the area to make for a pleasant evening for softball.

The Lady Panthers, (3-0) will be in action Thursday night as they prepare to take on the Wesson Lady Cobras at Wesson. Junior Varsity action will begin at 5 p.m. followed by the varsity game at 6 p.m.

WESSON – Reserved seating and season football tickets are now on sale for the 2015 Copiah-Lincoln football season. Tickets for... read more