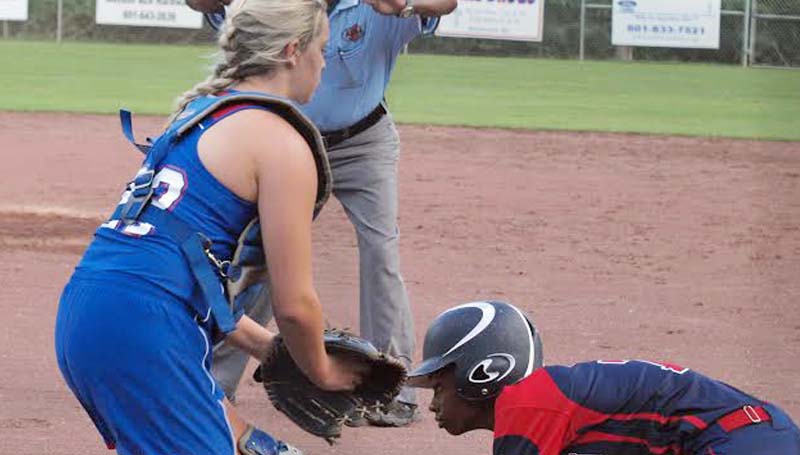 WESSON – The Brookhaven Lady Panthers held yet another opponent scoreless in the match-up between Ole Brook and the Wesson Lady Cobras Thursday night at the Wesson softball field.

However, it is yet to be determined which was better to watch, Kat Wallace and her two separate double-outs made by tagging the runner headed to second base and then throwing the ball to first to get the second out, or the three homeruns knocked over the fence – two by Katherine Shell and one by Haley Speaks.

The mild temperature for an August evening, along with shade trees, offered a pleasant setting for the ballgame, and after a slow start in the first inning that saw the Lady Panthers only score one run by Cheyenne Motley, things began to pick up pace.

The third and fourth innings were a bit slow with a few hits mixed in, but no runs scored.

During the fifth inning, the Lady Panthers’ bats came alive as they scored five runs, including the first home run by Shell. Also scoring in that inning were Motley, Jada Henderson, Fallon Brooks, Speaks and Macy Ziskin.

At the Panthers’ last bat in the sixth inning, the team managed three more runs. The first of the runs came by Shell’s solo homerun and then by Brooks, who was on base when Speaks knocked her two run homer over the fence.

As for defense, the Lady Panthers had several innings where they got three up, three down. Showing outstanding defense was Shortstop Ziskin who snagged several balls in the field that she hurled over to first base to get the out. The outfielders Bussey, Henderson, Brooks and Motley kept the ball in front of them, also, to add to the team’s defense.

“Our defense played well tonight. Our hitters came through in the fifth inning. Katherine Shell hit the ball really well with her two home runs and Haley Speaks did the same with her one homerun,” said BHS Head Coach Mandy Vinson. “We have been practicing hard and I am proud of the girls.”

Wesson Head Coach Michelle Nunnery said, “We are still struggling with our hitting. Having six hits in a slow pitch game is not going to get it.”

With 14 hits in the ball game, the Lady Panthers were led by Shell, who provided two homeruns and a single. Speaks served up a homerun and a single. Hitting doubles were Bussey and Brooks. Motley put three singles into play while Henderson added two singles to the mix. Hitting safely for the night were Wallace, Ziskin and Allen. Speaks, Reagan Atterberry, and Rileigh Allen all got on base safely due to walks.

Allen pitched the win for the Lady Panthers with no walks and no strikeouts.

Tamiya Cooper and Sharquita Cook both belted doubles, while Kyla Henderson, Madison Thompson, and Ciera Henderson each singled. Maddie Miller, Regan Atterberry, Jadeyn Fuller and Gracie Hudnal all four had walks for the night for the Brookhaven team.

The Lady Panthers, (4-0) will be in action Saturday as travel to Hattiesburg for a tournament.