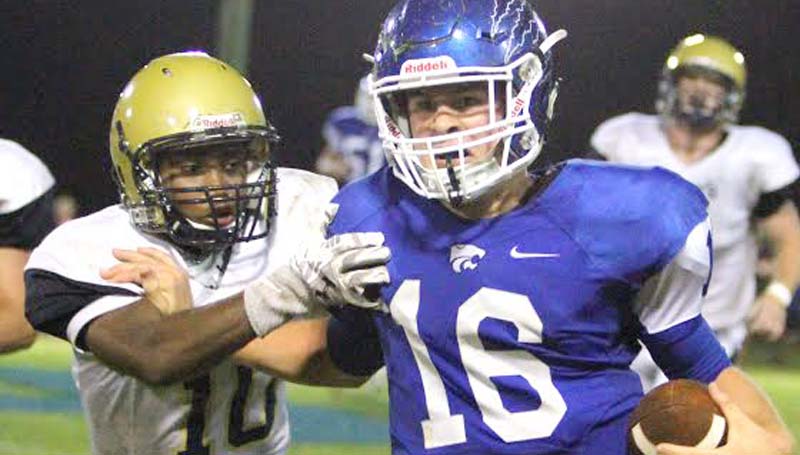 King connected with receiver Fisher Warren for nine yards to put the first points on the board for the Cougars at the conclusion of the first quarter. Nic Ciszner’s kick would be true closing the deficit to 14-7. The drive began when Madison Smith returned a punt across midfield and deep into Saints’ territory.

King was unable to get BA’s passing game going and finished 10 of 19 for 70 yards and a touchdown. King was able to connect with his younger brother, receiver Price King, twice for 13 yards, and leading receiver Ross Felder hauled in five catches for 52 yards.

Saints quarterback Blake Greenlee didn’t go to the air too often, but he did make it count when he was called on. Greenlee completed six of eight passes for 129 yards and three touchdowns. Greenlee connected with receiver Michael Goddard twice in the first half for touchdowns. The Saints’ game plan was to hammer the ball into the Cougars’ defensive line the entire game and it would prove successful as the Saints collected 196 yards on 36 rushes.

The southpaw King was able to gather yardage outside the pocket on 12 rushes totaling 36 yards, which led the team.

The Cougars’ defense was led by senior Roger Rushing with eight tackles and Connor Griffin and Grant James combined for 12.5 tackles. Connor Smith and Hinter Sasser had five tackles each.

The Brookhaven Academy Cougars (0-1) will be on the road Friday as they travel to Jackson to take on the Central Hinds Cougars at 7 p.m.