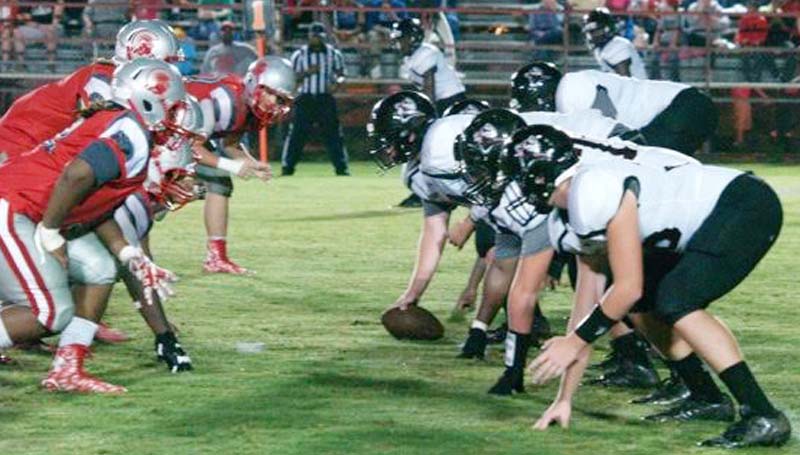 The LCHS tandem of T-Tez Cole and Quitten Brown put on a show against Magee, combining for 300 rushing yards and five touchdowns. Each player also had a defensive takeaway.

“We had a pretty good night,” said second-year Lawrence County coach Jaymie Palmer, “With two very good players leading the way. We’ve got plenty to work on, plenty of room for improvement, but I thought it was a very decent opening night, against a tough Magee team.”

The Lawrence County ground attack was decisive. Brown rushed for 158 yards and three touchdowns, on 13 carries. He also had an 85-yard kickoff return for a touchdown. Cole gained 142 yards on eight carries, and also scored a touchdown.

Cole was largely responsible for a two-play sequence late in the third quarter that sealed the Cougars’ victory. Trailing 25-14, Magee was driving deep in LCHS territory when Cole, who also plays linebacker, recovered a Trojan fumble at the 7-yard line. On the very next play, Cole popped a trap play for 89 yards, carrying it all the way to the Magee 4-yard line. On the very next play, Brown scored, giving Lawrence County a three-touchdown lead.

“That was a huge sequence right there,” said Palmer. “If Magee had scored there, we’d have been in a fourth-quarter battle for the game. Those two or three plays changed everything.”

Brown, who plays safety on defense, also had a big night on that side of the football. He had a first-quarter pass interception, and was among the leading tacklers for the LCHS defense. Unofficially, both Brown and Cole had double-digit tackles.

Magee had explosive players on offense as well. Junior quarterback Tyrique McAfee completed 15 of 24 passes for 142 yards and two touchdowns. His favorite receiver, R.J. Hopkins, caught nine passes for 97 yards and a score.

Magee took the opening kickoff and drove 85 yards in 14 plays, using up half of the first quarter. Lawrence County responded with a touchdown drive of its own, the final 50 yards coming on a fake punt. The football was snapped short to Cole, who then handed off to Brown, who raced around the right end for the touchdown. That tied the game at 6-6, as both teams struggled to convert extra points.

Moments later, a Mark Rhodes tackle and fumble recovery set the Cougars up at the Trojan 23-yard line. Quarterback Charl’Tez Nunnery ran for 18 yards. Two plays later, he scored on a 4-yard touchdown scramble, making it a 12-6 game. Quitten Brown’s pass interception gave Lawrence County another scoring opportunity late in the first quarter, but the Cougars were unable to convert.

Leading 19-6 late in the first half, the Cougars were unable to hold onto that margin, as Magee drove 76 yards in eight plays, scoring on a Dee Newsom four-yard run. McAfee passed to Hopkins for two points, making it 19-14 at the half.

Lawrence County started the second half with a bang, as Brown raced untouched 85 yards for a touchdown. The kickoff return team was good for the Cougars all night long. LCHS led 25-14.

It was still 25-14 late in the third quarter, when Cole’s big fumble recovery and 89-yard run took the starch out of Magee. After Brown’s four-yard touchdown run, extra point holder Gage Daley flipped the football forward to Cole, who ran in for two points. The Cougars had a 33-14 lead. LCHS put the game away with 10:02 left in the fourth quarter, when Cole scored on a 23-yard run.

“We certainly didn’t play a perfect game,” Palmer said. “We have plenty of things to work on, but I liked the way we protected the ball tonight. Whenever you’ve got a ‘zero’ in the turnover category, you’ve probably got a chance to win.”