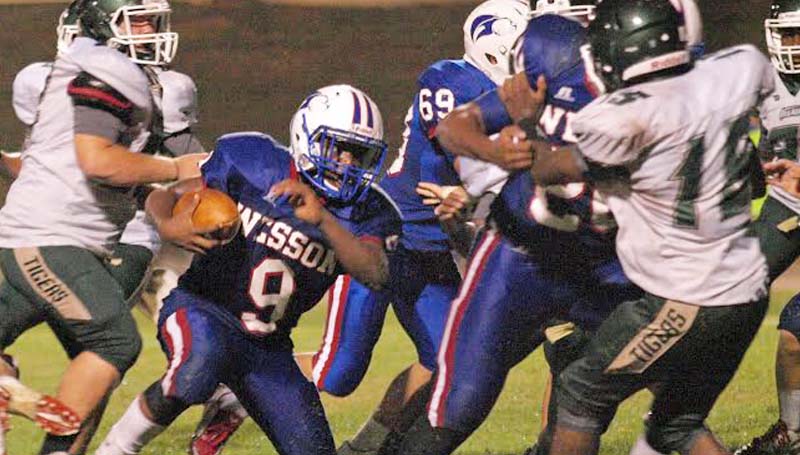 WESSON – The Wesson Cobras suffered a heart-breaking 7-6 defeat at Stone Stadium Friday night, with a lost fumble turning into a game-winning touchdown for the McLaurin Tigers.

“This was a very disappointing loss,” said Cobra coach Ronald Greer. “We had several missed opportunities to score in the red zone. Penalties and turnovers really hurt us and we must correct our mistakes and get better every week.”

In the first half of the game, the Cobras controlled the contest by moving the ball down the field, but fell short of reaching the endzone during each offensive possession.

Wesson junior Eric Rhymes managed to get the Cobras on the board first, but it was called back for a penalty forcing Wesson to attempt a field goal which was unsuccessful.

On Wesson’s next offensive attempt, the Cobras had a pass intercepted by the Tigers’ Greg Gunter. The Tigers also struggled offensively with two fumbles that were recovered by Wesson’s Davion Frye and Bobby Pritchard.

Davion Frye intercepted a pass to put the Cobras back in control with one minute left in the half, but Wesson was unable to make it to the end zone as the first half ended in a scoreless contest.

In the third quarter, the Tigers managed to get their offense going, before throwing an inception to Cobra Devin Merrell in McLaurin’s territory. Wesson moved the ball down the field with rushers Peyton Burns, Eric Rhymes and Tre Glasper, and senior Cornelius Barlow punched in Wesson’s first touchdown on a run. The extra point attempt was unsuccessful, bringing the score to 6-0 at the end of the third quarter.

In the fourth quarter, the Cobras fumbled the ball and the Tigers’ Nahken Hill recovered it in Cobra territory. The Tigers were able to score in the last five minutes of the game when quarterback J.T. Horton ran the ball into the endzone for a touchdown. The extra point attempt was good putting the Tigers in the lead 7-6 with 4:55 left in the game.

The Tigers’ defense held the Cobras for the remainder of the game to secure a 7-6 win.

Offensively, Wesson finished with 47 rushes for 224 yards. Peyton Burns was two of 10 for 27 yards passing for a total of 251 offensive yards.

The Cobras’ leading rushers were Eric Rhymes with 18 carries for 92 yards and Cornelius Barlow had 10 carries for 46 yards and one touchdown. Barlow also caught a 17-yard pass. Demarcus (needs a full name) had a 16-yard pass reception.

Defensively, the Cobras were led by Bobby Pritchard, Kendrick Brown, Jemarcus Patterson and Davion Frye with six tackles each. The Cobras had two fumble recoveries by Davion Frye and Bobby Pritchard and two interceptions by Eric Rhymes and Devin Merrill.

McLaurin finished with 33 rushes for 162 yards and was two for seven passing for 62 yards for a total of 224 offensive yards. Quarterback J.T. Horton was the top rusher with 12 rushes for 66 yards and one touchdown. Johnathon Cooper caught an 18-yard pass and Greg Gunter caught a 13-yard pass and had one interception.

Defensively, Chrishard Chase was the leader with four tackles.

The Cobras (0-1) will travel to Sumrall to face the Bobcats next Friday night. Kickoff is at 7 p.m.